Brendan Gaughan grabbed the transfer position in the caution-free second Duel by finishing 15th, ahead of the Open cars of Casey Mears (who was already locked into the 500 on speed) and Joey Gase.

Aric Almirola ran third in the second Duel behind his Stewart-Haas Racing teammate, giving Ford drivers the top three positions in each of the Duels in the debut year of the Mustang in Cup racing — a far cry from Sunday’s time trials, where Chevrolets posted the five best laps in single-car runs.

Kevin Harvick led the last 44 laps on Thursday night to win the first Duel and secure the third starting spot in Sunday’s Daytona 500 (2:30 p.m. ET on FOX, MRN and SiriusXM NASCAR Radio). A two-time Duel victor, and the winner of the 2007 Daytona 500, Harvick will start third in Sunday’s race, with Ricky Stenhouse behind him in fifth and Paul Menard in seventh. Logano claimed the fourth starting position with his victory. Bowyer will take the green in sixth, Almirola in eighth.

The Duel victory was the first for Logano, who won the Daytona 500 in 2015. As the laps wound down, he was planning his move and got an assist from Team Penske teammate and drafting partner Ryan Blaney.

“You have the whole race to think about making a move, and we were all out there just waiting,” Logano said. “Everyone behind me really wanted to go, and I just knew that I had to wait. The later you can do it, the less the risk if it doesn’t work. I got a good run from the 12 (Blaney) behind me and went to the bottom and got a good run.

“Was able to side-draft the 10 (Almirola) and pull him back and just barely get enough to break that plane in front of the 14 and clear him up. From there I was just blocking to the finish. My spotter, TJ (Majors), did a great job feeding me all the information I needed to make a decision. We had a really fast Shell Pennzoil Mustang.

“It’s cool to see a couple Mustangs in Victory Lane already. I hope it continues for the big race on Sunday. Great start for our race team. Off we go.”

Bowyer led 41 laps. Logano led one — the one that counted.

Despite finishing a lap down, Gaughan raced his way into Sunday’s Daytona 500.

“I always come off as a class clown, but I haven’t been that nervous in a long time getting behind the wheel of a race car,” he said. “The Beard family put so much into this and we come here to run very well; not run like that. You’ve got to have discretion of valor you’ve got to make do with what you have to make do with. I had to change strategies on the fly. Darren Shaw, my crew chief, and Ron Lewis, my spotter did a great job. Thank you, Corey LaJoie. He just kind of stuck right in there with us on that pit stop and that’s what got us in this position; so, thank you, guys. We’ll see you at the Daytona 500!” 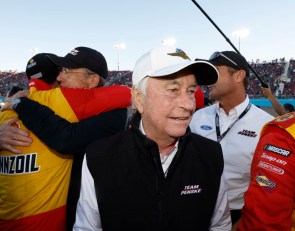 'I think we’ve tried it for 31 years, so it's about time' - Penske on the IndyCar/NASCAR double