The Frenchman’s lap of 1m34.786s was marginally faster than Action Express Racing’s Filipe Albuquerque (+0.119s) as the defending race winners used the run under darkness to rebound from missing out on most of qualifying due to a drivetrain issue with their Cadillac DPi-V.R. Acura Team Penske’s Helio Castroneves was third in his ARX-05 DPi (+0.340s), and DragonSpeed’s Ben Hanley led LMP2 with a 1m36.521s set in his ORECA 07.

BMW Team RLL’s Augusto Farfus managed an impressive feat in his GT Le Mans M8 GTE by outpacing Rolex 24 polesitter Patrick Pilet’s Porsche GT Team 911 RSR. The BMW completed a lap of 1m43.315s to the 1m43.317s delivered by the Porsche, accounting for a margin (+0.002s) that would be hard to measure on track. Oliver Gavin’s Corvette C7.R also got in on the GTLM party, falling a tiny amount (+0.038s) behind the German cars.

The Turner Motorsport magic conjured by team veteran Bill Auberlen was evident as his BMW M6 GT3 went to P1 in GT Daytona with his 1m45.165s lap. The Spirit of Race Ferrari 488 GT3 driven by Daniel Serra (+0.109s) was close in second, and GTD polesitter Via Italia was third with Victor Franzoni in the cockpit of his Ferrari 488 GT3 (+0.630s).

One notable absence from night practice was the Mazda Team Joest DPi program, which set a new all-time prototype lap record in qualifying a few hours earlier. The team planned to skip the session well in advance of the event, and spent the evening by getting a head start on its race preparations.

A lengthy red flag was necessitated when the Land Motorsport Audi R8 LMS GT3 pulled off course with steam and liquid trailing from the engine bay. Daytona International Speedway safety workers then dispatched trucks to dry a decent stretch of the infield, which added to the downtime. 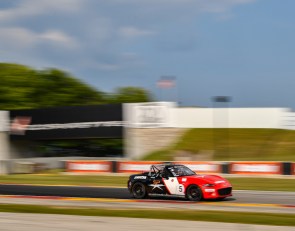