Elliott Sadler will retire from NASCAR without a championship on his résumé, an idea the 43-year-old hadn’t yet digested in the immediate aftermath of being eliminated from the playoffs after Saturday’s race at ISM Raceway.

“I don’t know if it’s [sunk] in yet that we’ve missed on it that much until I get to Homestead and understand all the stuff that’s going on around me and I’m not involved in it,” Sadler said.

“It hurts. But it’s not going to define me. I still feel like I had a pretty decent career and try to look at the positives and move on from that.”

Sadler finished 11th at ISM Raceway. The JR Motorsports driver had come into the weekend above the cutline, but Sadler knew early in the Whelen 200 things were really going to have to go his way.

Christopher Bell winning the race, when he had been outside a transfer spot, didn’t help. Neither did Sadler failing to earn points in either stage. Sadler also suffered right front fender damage early in the race that required multiple pit stops for repairs and put him behind.

After the checkered flag, Sadler apologized to his team over the radio. He then did so again during multiple interviews on pit road.

“I should have done a better job with the setup of the car,” Sadler said of taking the blame. “We fought way too many things today, and we tried some new stuff, and I led us in that direction. So, I take full responsibility for that.

“My guys did so much for me this year, and we were so fast at the right times, not closing the deal at Texas with a top two or three finish and probably not doing a good job here this weekend on setup stuff. Look I’m the driver, I don’t point fingers, it’s on me to communicate, I just feel like my guys is a really good race team, and we ran up front all year, I wish they were one of the four going to Homestead.”

With nothing to lose next weekend in Miami, Sadler said it will now be about throwing caution to the wind and looking for the victory; Sadler has been winless in the series since Kentucky in September 2016.

“It’s going to be an emotional week,” Sadler said. “I have one race left, and my wife and kids are coming with me to Homestead, and we’ll make the most of it, but it’s definitely going to be hard looking my guys in the eye knowing we’re not racing for the championship.”

Sadler can finish as high as fifth in the point standings after being the title runner-up last year. In his nine previous full-time Xfinity Series seasons, Sadler finished in the top five seven times, along with one sixth and one eighth-place finish.

The season finale will be Sadler’s 395th and possibly final career start in the series. 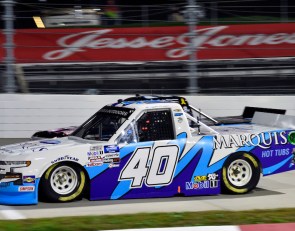 Since the late ‘80s the open-wheel racing season has started with the Chili Bowl and ended with the Turkey Night Grand Prix, which (…)

There’s a strong likelihood many of us will want to forget 2020, but don’t include Honda Performance Development in that conversation. (…)

A decade almost to the very  day… On October  18, 2010 at Toyota Speedway in Irwindale, California – now commonly known as the House (…)

Pierce Marshall and Matador Motorsports are bringing the Corvette C6.R that won the GT1 class pole in 2007 for the 12 Hours of Sebring back (…)

ABOVE: F1 is back in Bahrain for the first of two races. A variety of motor racing is available for streaming on demand at the (…)

Perhaps less well known, but still among the handful of successful American racing families are the Bettenhausens — Tony and his sons (…)

Following a successful first season of the Dinner with Racers television series, the adaptation of the long-running podcast is back (…)

MEDLAND: How Vettel can sign off from Ferrari in style

It’s fair to say 2020 has not been Sebastian Vettel’s finest year. In fact, I’d put pretty good money on him rating it as the worst of (…)

Russell not letting Hamilton, Alonso praise go to his head