A new female-only open-wheel series has been launched in the UK with the aim of clearing a path for women to compete in top-level racing.

The series will be free to enter, with 18-20 drivers unnamed having been selected based on what the series describes as “a rigorous pre-selection process involving on-track testing, simulator appraisal, technical engineering tests, fitness trials etc”. It will use identical Tatuus T-318 Formula 3 cars, powered by identical Autotecnica Motori inline four-cylinder 1.8-litre turbocharged engines, using Sadev six-speed sequential gearboxes, and fitted with HALOs. A prize fund of $1.5 million is on offer, including $500,000 for the series winner and payouts down to 18th in the standings.

Although the schedule is yet to be released, the inaugural series is slated to take place across Europe, with events in the Americas, Asia and Australia planned for forthcoming seasons.

Initial reactions have been mixed. The series itself preempted backlash against the idea that females can’t compete against males wheel-to-wheel with the following statement:

“At the heart of W Series’ DNA is the firm belief that women can compete equally with men in motorsport. However, an all-female series is essential in order to force greater female participation. W Series is therefore a mission-driven competition, the aim of which is not only to provide exciting racing for spectators and viewers on a global scale, but also to equip its drivers with the experience and expertise with which they may progress their careers, racing and honing their skills in W Series before eventually graduating to existing high-level mainstream racing series.”

This was reinforced by Coulthard.

“In order to be a successful racing driver, you have to be skilled, determined, competitive, brave and physically fit, but you don’t have to possess the kind of super-powerful strength levels that some sports require,” he said. “You also don’t have to be a man. That’s why we at W Series firmly believe that female and male racing drivers can compete with one another on equal terms given the same opportunity.”

“At the moment, however, women racing drivers tend to reach a ‘glass ceiling’ at around the GP3/Formula 3 level on their learning curve, often as a result of a lack of funding rather than a lack of talent.”

“That’s why an all-new all-female single-seater motor racing series is required – W Series – to establish a competitive and constructive motorsport habitat in which our drivers will be able to equip themselves with the necessary skill-set eventually to move on up to existing high-level mainstream racing series and compete with the best male drivers on equal terms.”

That argument was given short shrift by six-time Indy 500 starter Pippa Mann, who used Twitter to speak out against the initiative:

“What a sad day for motorsport. Those with funding to help female racers are choosing to segregate them as opposed to supporting them. I am deeply disappointed to see such a historic step backwards take place in my life time

“I wrote this last year when this series contacted me, trying to prey on the fact I do not have the funding to compete full time without them. I stand by everything I said. Sadly the #HandmaidsRacingSeries now lives.

“One more tweet on this subject. For the record, I stand WITH those who feel forced into this as their only opportunity to race. I stand AGAINST those who are forcing the above mentioned racers into this position as their only solution to find the funding to race.”

“Why not use the money to help fund that same core group of women drivers in series that already exist?,” she tweeted. “Want to be the best? Beat the best.”

British transgender racer Charlie Martin also spoke out against the idea, which she said institutionalizes discrimination.

“This series is founded on segregation, and while it may create opportunities for some female drivers, it sends a clear message that segregation is acceptable,” Martin said. “We no longer discriminate in sport based on race, so it is particularly jarring that we feel it is acceptable to do so based on gender in 2018. As racers, we want to compete against the best drivers – regardless of age, race, sexual orientation or gender – and prove we are the best at what we do.”

Female drivers have earned some degree of visibility – and a considerable amount of success – in the U.S., however only two women have ever lined up on a Formula 1 grid. The last was Lella Lombardi, who wrestled an uncompetitive RAM Racing Brabham BT44B to 12th at the 1976 Austrian GP. 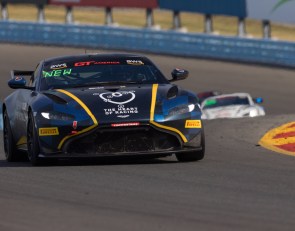