The smile on my face and adrenaline I had been running on following the inaugural Charlotte road course race lasted right up to the moment I collapsed into bed shortly before 1 a.m. Monday morning.

The elation was completely unexpected. Going into the weekend, I was convinced the whole thing was going to be a disaster. July testing had been anything but smooth, drivers were admitting to being terrified and ready for chaos, and the whole idea felt like a cheap way out for NASCAR and Charlotte Motor Speedway officials because it wasn’t a ‘real’ road course.

A wild Friday and Saturday, when multiple cars were torn up and Darrell Wallace Jr. spun at least three times on his own, did nothing to ease my mind. Yes, I was ready and expecting disaster. Bring on the Turn 1, Lap 1 carnage!

Two days later I’m still smiling, and pleasantly surprised to find that I was wrong after thoroughly enjoyed the weekend. Bravo and congratulations to NASCAR and Charlotte for taking this gamble.

Not only did last weekend generate a spike in energy, discussion and ticket sales (NBC Sports reported during the race broadcast ticket sales were above where they had been for the last 10 fall Charlotte races), and an increase in the ratings from last year, but from a pure entertainment standpoint both the Xfinity Series and Monster Energy NASCAR Cup Series races delivered.

As drivers figured out the 17-turn course and learned where the limit was, they became braver. Passing was possible, cars ran two and three-wide, and neither race lacked for a story.

With Sunday being a Cup Series elimination race, the drama around the final transfer spot was legitimate, and came down to a ‘can you believe that?’ last lap.

The wrecks? Nothing out of the ordinary. Even the 15-car wreck in Turn 1 with six laps to go was Brad Keselowski proving race car drivers are indeed human and make mistakes. Hell, a certain seven-time champion would do the same when it mattered most.

Charlotte also seemed to challenge drivers in a new and exciting way. Instead of going through the same monotonous routine on a mile-and-a-half track, I don’t think anyone could offer an honest prediction or guarantee about who would be in victory lane.

The sport, fans and I’ll even go as far as saying those of us in the media, needed to see something different after years of going through the same schedule, the same tracks, the same type of racing and contenders. We needed something new to experience, dissect and analyze.

On the flipside, even if Charlotte had been complete chaos, I’m not sure in retrospect that I would have minded that, either. Throwing curveballs at the top drivers in NASCAR every so often and keeping them on their toes isn’t a terrible idea. After all, a NASCAR official did say earlier this year “we’re obviously in the entertainment business.”

The entertainment of the Charlotte road course took hold of me and hasn’t let go, and I’m looking forward to enjoying it again next year, and what I suspect will be for many years to come. 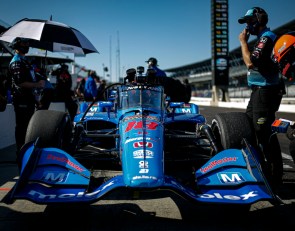