Three weeks after achieving his long-cherished goal of establishing a new piston-driven Land Speed Record at Bonneville’s Salt Flats, Danny Thompson announced that he is retiring the car originally built by his father Mickey Thompson, in the 1960s and painstakingly rebuilt by Danny and his small team of craftsman to pursue the record his late father had sought.

Today, Danny Thompson recounted his long adventure with the car, and explained his decision to retire Challenger 2:

When I took the Challenger 2 out of storage eight years ago, I had a chassis, some bodywork, and a lot of half-baked ideas about how to resurrect my dad’s old car as a world class streamliner. It was the hardest thing I’ve ever done, and it would have been impossible without the support and enthusiasm of racing fans all over the world. You helped me find my team, drove media interest, and made it clear to sponsors that we were a horse worth backing. My wife Valerie calls C2 the people’s car, and that’s exactly how I feel about it. You all came on this journey with me, and I’ll always be grateful for that.

I consider myself a pretty lucky guy, but the best piece of good fortune I’ve had is stumbling across my crew. These guys are the best in the world at what they do, and for the past four years, every single one of them has been a volunteer. They sacrificed their weekends, holidays, and pocketbooks to chase this dream with me, and I quite literally trust them with my life. When they strap me in and tell me the car is ready, I know I’m good to go. We made a quick video about most of the team members a year or so ago, and I hope you’ll watch it if you get a chance. These guys and gals are the real deal:

After we got back from Speed Week this year, we collected all our time slips and typed them up on a spreadsheet, which I’ve embedded below. 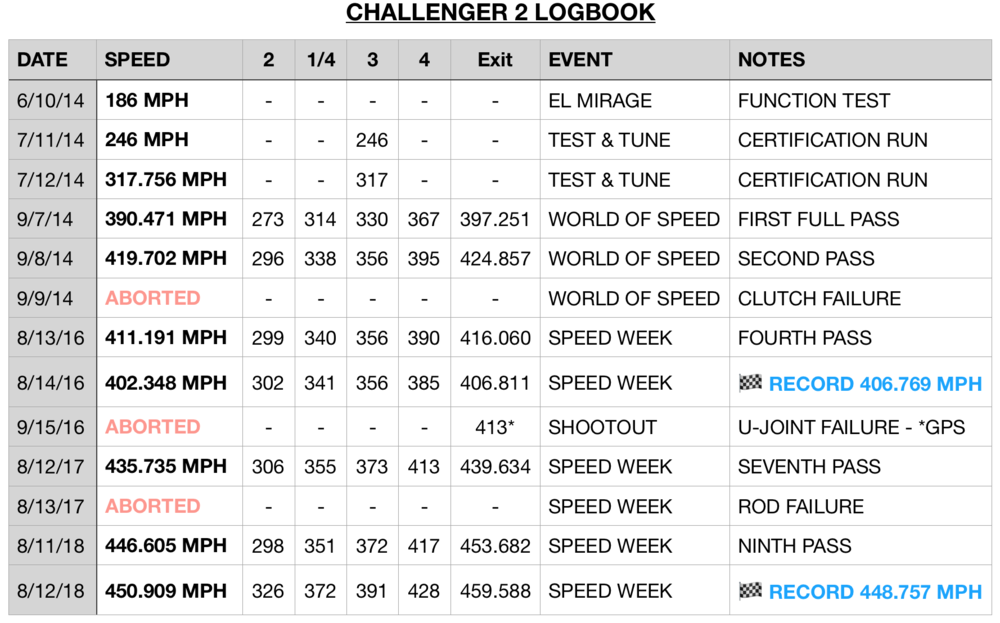 It’s hard to believe, but the C2 has only made 10 passes on a full length course. I’m not going to lie—I’m very proud of these numbers. As a competitive streamliner, the car is, for obvious reasons, pretty old fashioned. It’s difficult to service, the dual-engines are a nightmare for turnaround, and we’re missing a lot of safety features like traction control. For the record, had I built a car from scratch, I would have changed all of that. But that wasn’t an option, so my team and I made on a bet on old-school, balls-to-the-walls horsepower, and I think it was a good call. If you’re going to be pushing a stick through the air, you might as well push like hell. And we did.

People often ask me how fast I think the car could go under ideal conditions, and the fact of the matter is, I don’t know. If you look at the bottom line of the spreadsheet, it’s pretty clear that our last run was by far our fastest ever in terms of acceleration. If I hadn’t been sliding all over the course after the four, I think the final number would have been even stronger. In short, by walking away from the car now, I may very well be leaving some speed on the table. That said, I am walking away, which might not be the case if I go for another lock-to-lock joy ride at 430mph.

So is that why I’m retiring the car? No. It’s more prosaic than that. It’s the money. I should have stopped two years ago. If I was really smart, I probably wouldn’t have started. Our sponsors have been incredible, but like a lot of racers, a significant portion of this came out of my own pocket, and not in a way that was sustainable. A huge thank you to my wife Valerie for tolerating that. Dreams come at a high cost, often more than you think or planned for, but I strongly believe they’re worth pursuing. If you’ve got a bucket list, get started emptying it. I’m 69 years old! It’s not too late.

So what did I get out of this whole thing? As of today, the Challenger 2 is the fastest piston-driven record holder. Which isn’t really a thing by the way. It’s not a class, or an official title, or something you get a trophy for. But it’s what I’ve wanted from day one of the project, because it’s what MT and I believed the car had the potential to be. And if someone breaks the 448mph average tomorrow, that’s perfectly fine — that’s racing, that’s as it should be. Bonneville is the greatest amateur sporting arena in the world, and we’re all chasing speed like our lives depend on it. I’m going to be on the sidelines now, rooting for everyone. And based on some of the numbers that came out of this year’s Speed Week, there’s a lot to look forward to.

I’ve got to end with a word about family. I was supposed to rebuild the C2 with my dad. We didn’t get the chance to make that happen. But I know he was with me in the cockpit, and his name was right next to mine on the canopy. And when I broke the record, my mom, my wife, and my son were outside the car waiting for me. So let me say it one more time: thank you.

Andre Castro: The year so far