After 18 hours of racing in the 2018 24 Hours of Le Mans, the field has largely stabilized.

The No. 8 Toyota Gazoo Racing TS050 HYBRID continues to edge closer and closer to scoring the marque’s first win. Sebastien Buemi is behind the wheel, having completed over seven hours in the car to this point. The gap back to the No. 7 continues to extend, Mike Conway now 40s in arrears.

Elsewhere in the class, the two LMP1 privateer runners undergoing repairs (No. 10 DragonSpeed and No. 6 Ginetta) still hadn’t made it back out as the clocked ticked into the new hour, although the Ginetta looks close to re-joining the race after the team made a clutch pedal change.

In the LMP2 class, the gaps between the frontrunners also continued to widen, the No. 26 G-Drive ORECA now having lapped the third-placed Signatech Alpine, meaning that the only contender still on the leading lap is the Panis Barthez Ligier JS P217.

GTE Pro was also metronomic up front, the only real moment of excitement being when the No. 67 Ford became the latest challenger to undergo a brake change during a stop. The car is still running a solid fourth though, and remains within sight of the lead lap.

Down in eighth in the class, the No. 51 AF Corse Ferrari continued its charge after losing a lot of time early in the race. The car is now just a single lap down.

The GTE Am order also remained the same in the hour, with just two cars left on the lead lap, the No. 77 Dempsey Proton Porsche and No. 85 Keating Motorsports Ferrari. 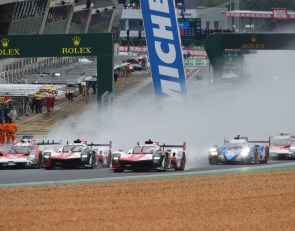