While he leaves Detroit with a pole and a podium in two races, Alexander Rossi was frustrated to leave Belle Isle without a win.

After a hard charge Saturday landed him the final spot on the podium, he was left almost speechless after Sunday’s race when his Andretti Autosport teammate Ryan Hunter-Reay forced him into the move that cost him the race with nine laps to go in the second Dual at Detroit.

Hunter-Reay roars back to Victory Lane after many close calls

Rossi, who won the Race 2 pole, was fortunate right off the bat, as he was the only driver to get around the unfortunate crash of the pace car – and its debris – before the race even started. He was able to make it back to pit line while the other 22 cars waited it out as the safety team cleaned up a significant debris field.

On lap 53, Rossi found himself with a six-second lead over Hunter-Reay after a quick pit stop by the No. 28 Honda. But Hunter-Reay made up about a second a lap and when he reached Rossi at Turn 3, Rossi locked up and slid into the runoff area, turning what looked like a dominating win for Rossi into a disappointing 12th place and an 11-second win for his teammate.

“It was a pretty disappointing day considering we led the most laps and started on pole,” said Rossi, who led a race-high 46 laps and trails points leader Will Power by 11 in the standings.

“For sure we didn’t have the pace for Ryan [Hunter-Reay] – he was just on another level. So hats off to him and the DHL team, they certainly deserved to win. But the Ruoff Home Mortgage car definitely had a second-place finish in it.

“Unfortunately, with less than 10 laps to go, our luck changed. We’re not really sure what happened, we’re going to investigate to see if something went wrong because it was a very abnormal issue to have when we hadn’t experienced anything remotely similar all weekend.”

For his part, Hunter-Reay said his first goal was to close the gap to Rossi, who looked like “a car off in the distance” until he saw he was closing on the No. 27 Honda — and when he saw he was catching Rossi in Turns 1 and 2, he put on more pressure.

“I thought that the gap and the interval that I closed on him, that at some point that weakness would be exposed,” Hunter-Reay explained, “so I was going to take my chances when it came to — for me to see where it was, and I found out that was out of Turn 2. So it hadn’t got to the point where I was going to lunge on him but it was getting there because I kept getting that little bit of front lock from him. So that kind of started to open the door. Then it opened.” 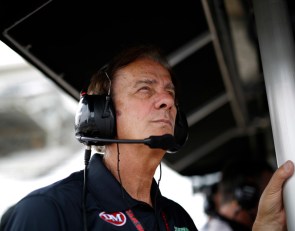