25 years of HPD at the Speedway

25 years of HPD at the Speedway

Honda’s first attempt at the Indianapolis 500 in 1994 was a disaster.

“I was walking up to Rahal’s scoring stand when Groff blew an engine and stuffed it into the Turn 1 wall,” recalled Clarke. “Carl (Hogan, who co-owned the team with Rahal) started screaming at Mr. Asaka (HPD’s head engineer), and the relationship went downhill from there. They rented cars from Penske and used Ilmor engines to make the race, and that was a very tough month.”

Tom Elliot, the president of HPD and driving force behind Honda’s involvement in open-wheel racing, added his memory: “We had people from Honda going to Indy to watch, and the only car we had was in a hotel lobby.”

But from that shaky beginning Honda and HPD blossomed into a dominating force. Beginning in 1996, Honda-powered cars won six straight CART championships before moving to the Indy Racing League and securing two more. To date, as it celebrates its 25th anniversary, Honda has scored 228 wins in IndyCar, including four of the last five Indy 500s and 12 in total.

And, in addition to rescuing the series for six years (2006-2011) as its sole engine supplier, Honda has become IndyCar’s most visible and valuable partner in terms of marketing and promotion. All because Elliott wanted to pursue big-time auto racing.

“We were racing IMSA, in Camel Lites with CompTech, thinking about the Camel GT Class when Honda dropped out of Formula 1,” he said. “We were always interested in ope- wheel racing since 1986, as long as Honda was in F1, but they had no interest in IndyCar racing.

“But when they left F1, we talked again and after telling them it wouldn’t take as much effort, they agreed to help us. American Honda financed the whole thing, and we purchased engines and parts from Japan. We announced in January of 1993 our inclusion into CART.”

Michio Asaka was the lead engineer at Honda R&D and Clarke was already ensconced in the Honda family working for Honda Access. He loved racing (competed in Formula Ford and Atlantic) and stumbled on to the big secret in Santa Clarita, Ca.

“I saw an Indy car sitting in our paint area and I start asking around,” he said. “It’s all hush-hush I was told, but I approached Tom and let him know I was interested.

“Mugen Honda actually did the original mule engine for the test program; built it in Japan. It was a aluminum block V8 – Honda didn’t have much experience with methanol or turbochargers.

“They were having problems with the block cracking, so then they went to cast iron and the blocks still cracked. Then they added something called a girdle, which added more weight and it didn’t have a lot of power.”

Following the Indy nightmare things didn’t get a lot better, and Elliott and Clarke learned during the Michigan weekend that Rahal/Hogan were dumping them for 1995.

“My opinion is that Carl pressured Bobby into dropping us,” said Elliott. “We knew it was going to be harder than Bobby thought and we knew we had a lot to learn. I think if Bobby would have stayed with us he would have won the championship in 1995.

“But we went with Steve Horne’s team for ’95 and he had Scott Goodyear and Andre Riberio driving, and we also had Parker Johnstone’s team. Scott had Indy won until he passed the pace car, and Parker won the pole at Michigan. Then Andre gave us our first win at Loudon.

“It was obvious our engine had improved, and Chip Ganassi approached us and showed the most interest. That turned out to be the turning point for us and Ganassi, but I always respected what Steve Horne did for us in testing and working with us.”

In 1996, Ganassi sported Jimmy Vasser and an F1 castoff named Alex Zanardi; Tasman had Adrian Fernandez and Ribeiro; Jim Hall hired Gil de Ferran and CompTech was back with Johnstone. When the smoke cleared, Honda drivers had captured 11 of the 16 races with Vasser taking the title.

The following year, Zanardi won the championship on the strength of five wins and returned in 1998 to score seven wins and another crown for Ganassi. Rookie Juan Pablo Montoya made it four in a row for Honda and CGR in 1999 with seven victories before Penske came on board and de Ferran claimed back-to-back titles in 2000 and 2001.

It was an onslaught, as Honda won 59 of 112 races during that stretch while competing against Ford, Mercedes and Toyota. The only downside of Honda’s superiority was the fact it didn’t compete at Indianapolis during those years because of the open-wheel split.

“Our first race at Surfer’s Paradise in 1994 was the weekend Tony George announced the IRL, and we had no idea about the in-fighting,” said Clarke.

Elliott was considering an Ilmor-prepared engine for its CART teams to run at Indianapolis before the infamous pop-off valve controversy at Detroit in 2001, which along with a sudden move to adopt IRL engine rules, eventually led to Honda pulling out of CART after the 2002 season.

“It was a sad day when we announced we were leaving CART, but we simply lost our trust in management,” said Elliott, who then took HPD/Honda to the IRL in 2003.

In the most ironic chapter of this story, Rahal was back with Honda in 2004 and delivered its first Indy win with Buddy Rice as Honda swept the first seven positions.

Then in 2006, with Toyota and Chevrolet down the road, Honda was asked by IndyCar to supply the entire field – which it did until 2011, when General Motors returned to competition.

“Brian Barnhart called and asked if we could step up and furnish engines for everyone, and that’s not what Honda wanted to do,” said Clarke, who retired in 2008.

“Toyota was already a lame duck and it helped save HPD from a work point of view. But I felt Honda saved IndyCar from itself. If we had not stepped up to be sole supplier, I’m not sure IndyCar would have made it.” 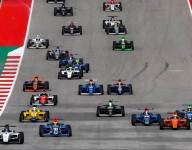