MILLER: How Michael made peace with the Brickyard

MILLER: How Michael made peace with the Brickyard

Only 10 drivers have led more laps in the Indianapolis 500 than Michael Andretti and, of course, they all made it to Victory Lane.

He didn’t, despite being out in front nine times in his 16 starts for a combined 431 laps (two more than four-time winner Rick Mears), but he’s managed to find some solace at the Indianapolis Motor Speedway.

“It’s different, for sure, because nothing takes the place of that feeling when you’re a driver,” Andretti said of winning from the other side of pit wall.

“It makes me feel really proud of our team and the effort, and celebrating is fun. It’s just different. That’s the best way I can put it.”

It was hard to imagine Mario’s oldest and somewhat shy son becoming a car owner, but it’s given him a new passion.

“It didn’t surprise me,” said longtime friend and business partner J.F. Thormann, president of Andretti Autosport. “Michael’s driving career was winding down, and I think being an owner was always in the back of his mind. You could tell from his focus that’s what he wanted to do, and he’s really got his heart in it. He comes in early every day, and stays late. It’s his life.”

In 2003, Michael bought out his former owner Barry Green and formed Andretti/Green Racing with Kim Green and Kevin Savoree, and two years later Dan Wheldon captured the Indy 500 for them. Dario Franchitti followed up with a win at IMS in 2007, and by 2011 there were no more partners and the team was simply Andretti Autosport.

And it’s Andretti Autosport, not Team Penske or Chip Ganassi Racing, that’s the team to be beat at Indianapolis this decade. Ryan Hunter-Reay conquered Indy in 2014, rookie Alexander Rossi triumphed in 2016 on Indy’s 100th running, and Takuma Sato triumphed in a thrilling duel with Helio Castroneves a year ago.

Twelve months after bringing Fernando Alonso to the Speedway, Andretti is back with six cars, including entries for Hunter-Reay, Rossi, Marco Andretti, rookie Zach Veach, Stefan Wilson and Carlos Munoz, who has finished second twice and third once for Michael.

Andretti’s 31-year-old son lost one of the closest finishes in IMS history back in 2006 and has finished third on three occasions, while leading 141 laps. If there is another win in the Andretti camp this month, the boss knows who he’d like to see drinking the milk.

“I can’t imagine what it would be like to stand in Victory Lane with Marco, but I hope I get to find out,” he said.

Only Lou Moore and Ganassi, who Michael drove for in 1994, have enjoyed as much success at Indy as Andretti, with five victories each – 11 behind Penske.

“You know, somebody told me that stat when we were in Victory Lane last May, and I’m like, `Whoa, that’s a big deal,”‘ said Andretti. “Obviously I couldn’t ever win it as a driver, so maybe I was meant to win it a ton of times as an owner. 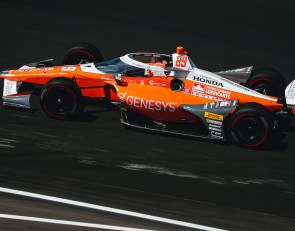