First things first. If you are in any way interested in motorsports history or in building any sort of respectable book collection about motor racing, you must add this book to your list. It is a remarkable account of the life of one of the most beloved personalities in the sport. Remarkable in the level of detail provided from the very earliest years of David Hobbs life.

Beginning with his early childhood in the war years in Britain and his youth in post war midlands England, he paints a picture of a life lacking no amount of happiness and adventure. The unusual nature of why his family found themselves in England provides context for much of his early career and the role his father’s technological prowess played. Hobbs does not come across in the book as one who was obsessive about cars and racing but rather someone who was simply not willing to accept any path but the one he chose himself.

His stories of getting into racing with support from his mother and father and the ability to see and seize opportunities, a common theme throughout his career, are evidence that in that era, optimism and an adventurous spirit were key to moving up the ladder. A refreshing contrast to todays’ racing world. When Hobbs moved into international racing and eventually to racing in the US on a regular basis, this book illustrates that it was opportunism rather that a clear and focused path determining what lay ahead for the pleasant Englishman.

This is book is also the story of someone who is very honest and comfortable with the part he played in motorsports. He states that to get to the very top shelf sometimes racers have to be, to paraphrase, difficult people, and that was not his nature. He comes across as a driver, or rather a person because his life is much more than driving, who laments not reaching the very to pinnacle of his sport (he did race in F1 but not often) only a little. He seems entirely happy with how his life played out. This is not to suggest he was without success. Quite the contrary, you don’t win F5000 and Trans-Am championships without some serious talent.

This book also chronicles the post racing driver period of Davids’ life – his career in television, his family and his auto business. His lifelong partner and wife, Mags, writes the final chapter and her support is strongly evident throughout his story.

In this area, the book leaves the reader wanting more. Because he has spent so many years on television, and in doing so has become a beloved part of many enthusiasts’ motorsports world, the part of Hobbs career in front of the camera is covered relatively quickly. His famous irreverence on TV (he refers to a four-time world champion as “Louise” Hamilton) would lead one to expect this part of the book to be full of anecdotes and fun, and while there are some, this part of his career was not explored in the same detail as the driving years.

While on small critiques, one other is the first half of the book follows a clear chronological timeline, but as Hobbs’ gets busier in his driving duties on two continents, the format shifts to addressing specific series across multiple seasons before going back to address the next series. This means a little back and forth in the chronology which could be a little confusing to readers not familiar with the details of the motorsports landscape.

These are minor however, and are amply compensated for by the plentiful photography throughout the book. It is as if he had planned a book from the very earliest days of his racing as virtually every car he raced is shown in some image.

All in all, a compelling read and a book that should be in every serious enthusiasts’ collection. 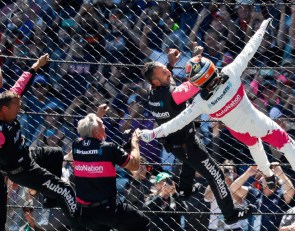