Neurologist/racer Calvert working to bolster safety while competing in PWC

Neurologist/racer Calvert working to bolster safety while competing in PWC

Preston Calvert has returned to his roots in GTS, running the second Panoz Avezzano in the Pirelli World Challenge GTS-Am category. For the man who entered the series in a Mustang Boss 302 in the class before it became all-GT4 and was Rookie of the Year in 2015, it completes a full circle after he also competed in GT Cup and GTA. It’s also the reward for a lot of hard work, both in his first career as a neurologist and neuro-opthalmologist and in his second as a racing driver. Now not only is he racing at a high level, he’s giving back to the sport by working to identify and prevent concussions and other brain injuries.

After getting his medical degree at Brown University, Calvert practiced for 30 years in military – 15 years in the army – and private practice. Neurology concerns the nervous system, of which the brain is the control center, and neuro-opthalmology is a specialty subset that deals specifically with neurological disorders that affect vision. Concussions, part of the category known as mild traumatic brain injury, are in that realm, and a far-too-common occurrence among racing drivers.

“One of the things I observed as I started driving race cars was that not every series had developed a protocol for detecting and managing the occurrence of concussions in drivers,” Calvert explains. “Race car safety design now protects the driver in mild to moderate – and even severe – impacts from major bodily injury quite well, so the chances of having a life-threatening injury are relatively small in a crash now. But on the other side, the helmet that we wear, as good as it is, is only engineered to protect us from impacts. It turns out concussions, and similar mild traumatic brain injuries, occur primarily from rotation motions of the head, rotation accelerations and decelerations of the head, and no helmet currently available has been proven to reduce that kind of injury to the brain.”

While Calvert says that some manufacturers are working to solve the problem, until that happens concussions remain a cause of concern; multiple brain injuries, or concussions too close together, can have a cumulative effect. When Calvert added “Medical Advisor” to his World Challenge résumé last year, he began looking at ways to quickly diagnose a mild traumatic brain injury so that further treatment can be sought, or the driver can be cleared to race. Fortunately, the answer already existed and had already been used in other high-impact sports.

“Because this is such a major issue and having experience with concussions myself in crashes, I realized that this is something that I had the ability to bring to World Challenge. Essentially as a volunteer effort, I worked with some friends of mine in the neuro-opthalmology community to adopt a program that has been used in the National Hockey League, rugby, and lots of high school and college football programs. It is co-developed by the Mayo Clinic along with the company that markets the software to test athletes. The basic idea is it requires a test of eye movement, concentration, attention and verbal repetition of numbers that are seen on a screen. It’s a timed test, and there are established norms.

“If someone tests at a certain level and is retested, they generally perform at the same level or better if nothing has happened to them in the interim. But if they have had a significant concussion or head injury in the recent past, they will usually test more poorly. So we combined that with a questionnaire that can be administered after an injury to help take an inventory of symptoms that somebody might be experiencing, like headaches, difficulty with memory or irritability,” Calvert explains.

Beginning at the St. Petersburg, the opening round for 2018 for GT and GTS, the Pirelli World Challenge tested all the drivers to set a baseline. After a crash serious enough that the driver can’t continue, if drivers are exhibiting obvious confusion, they will be transported. But if they appear OK, they will still be called to the stewards’ office to retake the test to either clear them or send them for further evaluation before they return to the track.

“I have great respect for the pro drivers who do this for a living, who basically risk their lives to earn a living out there in these cars, and I’ve been gratified that they now understand how important this is and are some of the most willing participants in this program,” he says. “Honestly, I might not have predicted that in the early going; I thought they might resist it.”

The respect that Calvert has for his fellow drivers is mostly returned, not only for his efforts in making racing safer but for his prowess on the track. He’s won at every level in which he’s tested himself, and now faces a new challenge with a factory program. So far his best finishes are fifths, in a Sprint race at St. Petersburg and SprintX at Circuit of The Americas.

“It was a little bit of a business and financial decision as well as a sporting decision to switch from GT3 to GT4,” he says. “The running costs on the GT3 car are very high. Looking at the expense involved, and seeing that the GT4 platform was going to be the standard in GTS … One of the reasons we moved away from GTS previously was that the balance of performance seemed to be unpredictable and aspects of it were out of our knowledge and out of our control. Seeing that BoP was reasonably good for GT3, I became hopeful that GT4 in GTS would have that same reliability and eventual balance. So I started looking at GT4 options.”

Those options included an Audi R8 with GMG Racing – Calvert ran his GT3 Porsche with GMG – and came away from a test day suitably impressed. But he’d also been approached by Panoz about being the Am driver in the second car. Ian James had a lot of success in the car in its introductory season last year and, had it not been for some early season reliability issues, could have won the championship. Further, the front-engine, rear-drive configuration more closely matches the Mustang and C6 Corvette in which Calvert competes in SCCA Club Racing Touring 2 and GT-2, respectively; Calvert finished on the podium in both classes at the 2017 SCCA National Championship Runoffs at Indianapolis Motor Speedway.

“The mid-engine platform, I’m sure I would be comfortable in it eventually, but it was not an immediate natural fit. We went back and forth a bit, I got a good feeling talking to Tom Milner, Don Panoz and Ian James, as well as Stefan Pfeiffer who is the race engineer for the team and ultimately made a commitment to drive the whole season for them,” he says.

Calvert is driving the SprintX races solo as is permitted for a bronze-rated driver. He says that’s better for him than competing with a pro, because he gets more seat time. When a pro is involved, he explains, setup takes up the bulk of the practice time. Now he gets that seat time, plus he is able to improve the feedback he gives to Pfeiffer and the team. His first impressions in the early part of the season are good.

“The size off the field is terrific,” he says of GTS. “I think the number of both the Pro cars and Am cars in the field was really impressive, and it was enjoyable for me to realize that I’m competitive in the Am field. There are some folks in Am that are significantly faster than me, but race pace I was about half a second slower than the fastest Am drivers in the second race [at St. Petersburg], so that has given me some encouragement that if I keep building my skills and learning to drive the car better and set it up better, we can be competitive.” 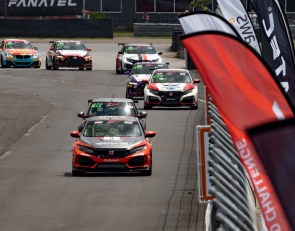