Italy’s Daniel Mancinelli made a bold move on Toni Vilander with just over seven minutes to go in the Pirelli World Challenge Round 3 GT Sprint event, nudging the pole-sitter’s R. Ferri Motorsport Ferrari 488 GT3 out of the way to take the lead and hold on for the win in his first race of the season in the No. 31 TR3 Racing/Ferrari of Vancouver Ferrari 488 GT3.

Vilander led from the drop of the green flag, but Mancinelli outbraked him heading into Turn 1 on lap 27, and while the two made door-to-door contact both were able to keep control, Mancinelli pulling away in the final five laps.

“I knew that Toni would have a good race pace today with his Ferrari,” said Mancinelli. “I was able to close in on him after the yellow flag period. I felt I was quicker than Toni in several spots, but I had to work hard to get close enough to make the pass. I made the move for the lead after I got some good momentum into Turn 1. Toni left a little opening for me and I had to take it. From there, I managed the car to the finish. It is a great win for Ferrari and TR3 Racing.”

Vilander admitted Mancinelli was stronger in the Turn 1 braking zone.

“I like this track a lot and we had good pace today,” said Vilander. “In qualifying, I was able to push very hard for the pole on Saturday. Today, Daniel was stronger today in the braking zones in Turn 1 and Turn 11. After the safety car period, I struggled a bit with the tires and the grip in general. Daniel was willing to take more risks today.

“This was a great day for Ferrari and Ferrari has invested a lot in racing in America. Finishing 1-2 for Ferrari at Long Beach is important for Ferrari.”

Daniel Morad, who held second for most of the race in the No. 2 CRP Racing Mercedes-AMG GT3, lost several positions with 20 minutes to go when he slowed with an electrical issue. That left the door open for Alvaro Parente, who started ninth overall in the No. 9 K-PAX Racing Bentley Continental GT3, to finish third.

GT championship leader Scott Hargrove, who was spun out of the hairpin by the No. 24 Alegra Motorsports Porsche of Michael Christensen with just over 10 minutes to go, finished fourth; Christensen was issued a drive-through penalty.

Alec Udell was issued a one-minute penalty for contact with Mike Sullivan’s Competition Motorsports Porsche Cayman GT4 CS-MR on lap 8, which sent Sullivan hard into the concrete retaining wall and led to a 15-minute caution. Sullivan exited the car after several minutes under his own power.

The GTA class saw last-lap drama as Martin Fuentes – who arrived back in Long Beach in the pre-dawn Sunday hours after an overnight trip to Mexico City – battled class leader Yuki Harata in the Japanese driver’s first Long Beach race. 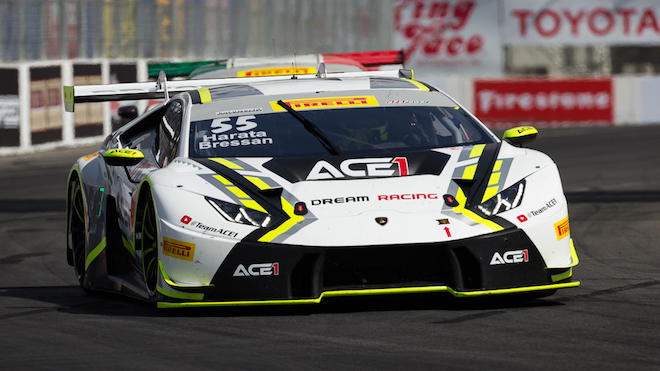 Harata, the 2017 GT Cup series champion, held on in his No. 55 Dream Racing Motorsport Lamborghini Huracan GT3 for his first career GTA class win. Harata defeated Fuentes by just 0.163 seconds at the finish line, while Parker Chase, also in his Long Beach debut, rounded out the GTA podium.

“I lost both mirrors and I had no information,” said Harata. “I didn’t know where I was. The team kept telling me to go because I had a good pace. My last race was kind of a mess, so I’m happy for this one. I finished off my tires and I was all over the place. This is my first GTA win, and my first race in Long Beach. The weekend was incredible for me and the team.” 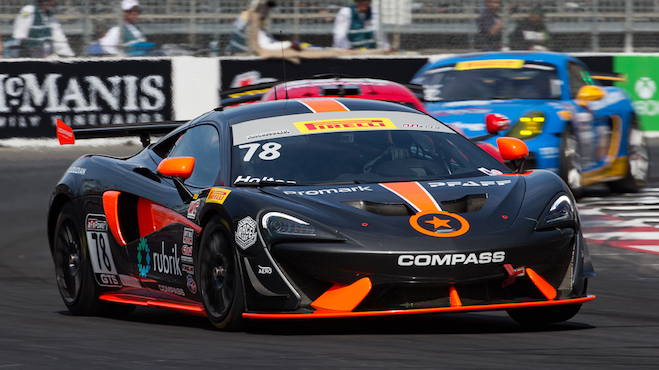 Compass Racing’s Paul Holton was the winner of the GT4 Invitational class ahead of Racers Edge Motorsports’ Harry Gottsacker, while Bob Michaelian took honors in GT4 AM.

The Round 3 GT/GTA/GT4 Invitational event from the streets of Long Beach will be televised on CBS Sports Network next Sunday (April 22) at 3:00 p.m. ET.

Road to Indy 4m ago