Alexander Rossi was fastest for the second straight practice session for the 44th Toyota Grand Prix of Long Beach.

Rossi and teammate Ryan Hunter-Reay (+0.2662), who was fourth quickest, have finished in the top four in all three sessions. Hunter-Reay, who won here in 2010, thought some speed was left on the table.

“We rolled off with a good car, hats off to the team for that,” he said. “We just didn’t get everything out of it this session. The red [flag] came out when we were on a new tire run, so we’d like to have seen where we stood.

“We just need to make the right changes for the hotter conditions.”

Takuma Sato, who hit the wall in the second practice on Friday, came back with a repaired Rahal Letterman Lanigan Honda and finished 15th quickest.

Marco Andretti, who has been battling a mechanical issue, was 13th.

Zachary Claman De Melo brought out a 10-minute red flag when his No. 19 Dale Coyne Honda stopped in the Turn 5 runoff with 33 minutes remaining. The team worked on electrical issues before sending him back out.

Rookie Jordan King brought the session to a slightly early end when he when he ran into the Turn 8 tire barrier. His Ed Carpenter Racing teammate Spencer Pigot finished the session seventh fastest. 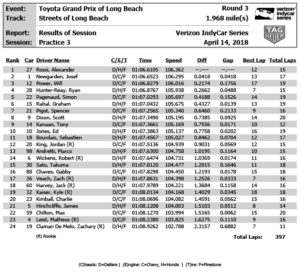