The opening practice session for the Toyota Grand Prix of Long Beach bolstered the expectations of Team Penske’s drivers that Sunday’s race should provide plenty of spectacle.

“I think tire degradation will definitely make for [passing] opportunities,” said Simon Pagenaud. “This morning the traction was very low and the rear tires were getting used up, so it’s definitely going to play a role, I think. We’ll see how the track changes. There’s vintage [Trans Am] cars, as well, this weekend, so that might play a role in how the cars feel during the race. But yeah, should be pretty interesting.”

While Josef Newgarden (pictured above) felt the effects of tire degradation might be overplayed, he agreed it would be a factor.

“I actually felt like we thought tire degradation was going to be more of an issue at St. Petersburg than it was,” Newgarden said. “We went into the race thinking it was going to be a big problem, and it wasn’t as big of a problem as we thought. But you still saw people struggling quite a bit. I guess what I’m saying is we overcompensated for how much we thought it was going to be an issue. I do think it’s going to be worse here. I just think people are going to struggle out of the hairpin as tires get old.

“You’re going to see a lot of passing in Turn 1, and I think out-laps are really the thing to watch now. In St. Pete, out-laps were very difficult, so you could pass anywhere in that type of situation. If someone has cold black tires coming out, they’re going to really struggle to get around the lap and keep people behind them, and I think that will create good opportunities for whoever you’re racing against. I think the show will be much better for sure than last year. Not that it was bad last year, but it’s just going to take another step forward.”

Will Power was impressed by the closeness of the competition on a track the two-time Long Beach winner counts among his favorites.

“It’s actually amazing how close the times are for how many corners there are,” noted the Australian. “Normally that spreads the field out a bit, but it’s a real driver’s track to me because you’re apexing walls, and on the exits you’re generally coming out to meet a wall. So it’s about accuracy, and the surface has a high frequency of bumps, so the car is never really planted on the ground, which is a lot of fun. It is a cool track.” 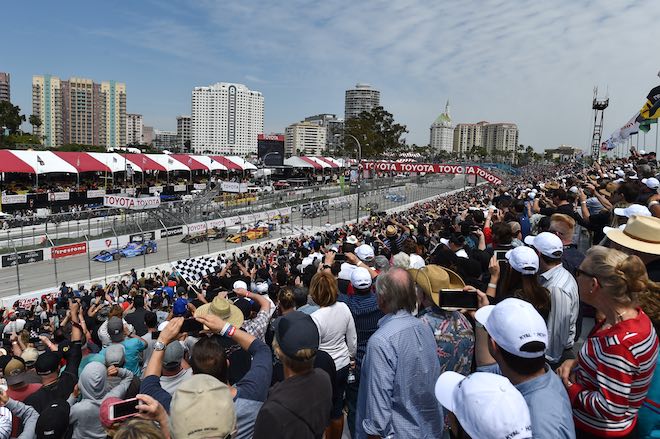 No matter how many passes the race ends up showcasing, it’s a fair bet there will be plenty of spectators on hand for a race that perennially ranks among the highest in estimated attendance of the season. While some contend street races like Long Beach have more party-goers than race fans on hand, Newgarden reckons Long Beach also attracts its own legion of legacy fans.

“I think you’ve got people here because it’s just a great event, and you’ve got people here that are old-school open-wheel IndyCar fans, and they just love this race,” the series champion said. “You’ll see people just drinking and having a good time and they’re just here for the event and enjoying it, but then you’ll see people with all this nostalgic gear that they have and they’ll tell you all their stories. It’s a little bit like the Indy 500, in my opinion. You get the people who have been here for 30 years that will tell you, ‘Hey, this is my story, here’s what I’ve got, I’ve got this old-school gear’ he wants me to sign.

“I think you get a really nice blend of both, and that’s OK. When you put on a street course race, it is kind of like a festival and a party, so you want people to just show up and have a good time and enjoy the atmosphere, but it’s also nice to have those purist racers that are here for the action and want to see the race, and I think you get a good mix. Percentage-wise, it’s hard to say. I don’t know, maybe it’s 50/50. I have no idea.”