P2 teams could turn the tables at Long Beach

P2 teams could turn the tables at Long Beach

Could one of IMSA’s privateer P2 teams come out on top this Saturday at the 100-minute BUBBA burger Sports Car Grand Prix at Long Beach? Speaking with DPi entrants, there’s a genuine concern the tables could be turned after the latest Balance of Performance tables were set for this weekend’s street race and the next round at Mid-Ohio.

The series has heard an increasing number of concerns from privateer P2 entrants in the WeatherTech SportsCar Championship since the opening race in January where manufacturer-based Daytona Prototype internationals held total control over the Prototype class. Another DPi romp at Sebring highlighted the gap to the spec WEC P2s, and with their voices reaching new levels of displeasure entering Long Beach, it’s become clear that a serious effort is under way to bring its WEC P2s forward in the fight for overall wins.

IMSA’s stated practice of adjusting BoP in the Prototype class by aligning the DPis to match the anticipated pace of the fastest WEC P2 model has remained, through Sebring, an aspirational goal.

In the Long Beach/Mid-Ohio BoP, sweeping changes have been made to slow all four DPi models in an effort to accurately match the projected pace of the ORECA 07-Gibson, which serves as the fastest WEC P2 chassis at the moment. Rather than give speed to the WEC P2s, which IMSA has always said it wouldn’t do, the DPis are being dialed back to achieve all-elusive parity.

Cutting power is the primary move as three turbocharged DPis have received significant boost reductions, the lone naturally aspirated engine will ingest air through smaller restrictor openings, and all four cars will have less fuel to carry in the race, which could complicate plans to pull off a one-stop run. 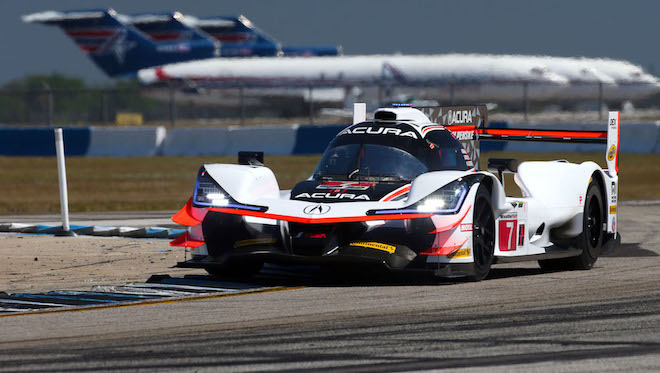 Starting with Acura’s ARX-05, the twin-turbo V6-powered DPis have lost boost at 15 increments – its complete rev range – from 2000-7750rpms. The Team Penske-run cars will also compete with 73 liters of fuel capacity, down three liters from Sebring.

Cadillac’s championship-leading DPi-V.R has surrendered a total of 0.6mm in diameter from the dual air restrictors that feed its hearty V8 motor, and with the removal of two liters of fuel capacity – down to 66 liters – the trio of General Motors products continue to have the smallest tanks in the category.

Mazda’s RT24-Ps, which showed great promise at the 12-hour race, have been hit the hardest with the largest boost reduction throughout every increment in the 2000-9100rpm BoP table. It’s four-cylinder turbo will also carry an extra 10 kilos of weight – up to 925kg – and was the only DPi to receive a ballast penalty. The pair of RT24-Ps also received the greatest fuel capacity cut to a maximum of 73 liters, losing seven liters from Sebring.

Coming off its victory last month, the Nissan Onroak DPis fielded by Tequila Patron ESM will content with the same boost cut through the 2000-7600rpm rev range mandated for its twin-turbo V6 powerplant. The ESM team will also need to bring the Nissan DPis to 77 liters of fuel capacity, down three liters. 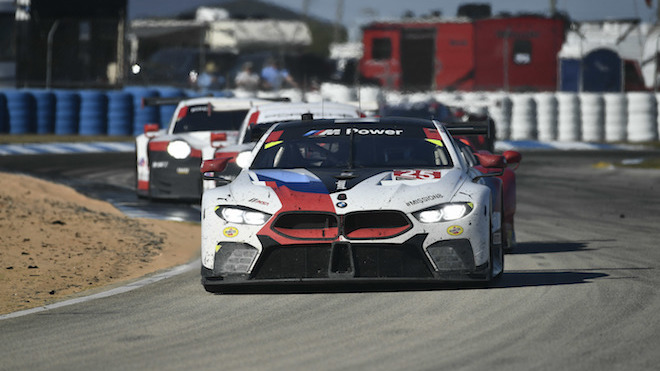 In GT Le Mans, the second class running at Long Beach, only BMW’s brand-new twin-turbo V8 M8 GTE model has received BoP adjustments. Slowest at Daytona, then fastest at Sebring after the BMW Team RLL cars were given a necessary BoP break, the pendulum has swung backwards again as the big sedans have lost boost at nine increments between 5000-7500rpms. Four liters of fuel capacity have been taken as well, bringing the cars to a maximum of 93 lite to carry on board.

The rest of the GTLM models are unchanged for the next two races.

And in GT Daytona, which skips Long Beach but returns at Mid-Ohio, BMW’s customer M6 GT3 is also the lone model to be affected by BoP alterations. The twin-turbo V8 machine will race with a valuable weight break of 20 kilos, but has given back two liters of fuel capacity, now set at 106 liters.

Of the Prototype BoP changes, the Mazdas appear to be in for an uphill battle just miles away from the manufacturer’s North American base. And with boost losses for the other turbocharged DPis, the Cadillacs could survive the power reduction by putting the V8’s torque to use in the multitude of slow- and medium-speed corners. Whether DPis will have a chance of keeping the better WEC P2s behind them is another matter altogether.

With the absence of GTD, some of the mistake-driven drama seen last year could be missing, and if that’s the case, ragged competition from 14 Prototype entries and eight factory GTLM cars should make for an incredible ride into Saturday evening on Shoreline Drive.