Moran, a five-time Long Beach starter in the Atlantic Championship, joins the 21-driver field at the famed “Roar by the Shore” at the 1.968-mile, 11-turn temporary street circuit located along the Long Beach harbor.

“The last time I drove a sports car in competition was in 2011 with the Jaguar in the ALMS series,” said Moran. “I’m looking forward to driving at Long Beach again as well as driving the Audi R8 LMS from TruSpeed. We just tested the car up in Buttonwillow and I have to say that it is one of the nicest race cars I have driven. I’m anxious to get back in the car for Friday’s practice. These GT3 cars are very cool to drive.”

Moran is a second-generation driver from Orange County who followed in father Rocky Sr.’s racing footsteps from karting to single-seat racecars to sports cars. His last Long Beach appearance came in 2015 in the Verizon IndyCar event, but Moran was injured in a practice crash and could not start Sunday’s feature race.

Moran will team up with 17-year-old Parker Chase in the another TruSpeed Autosport GT3 car, the No. 19 Audi R8 LMS this weekend in the Pirelli World Challenge competition. 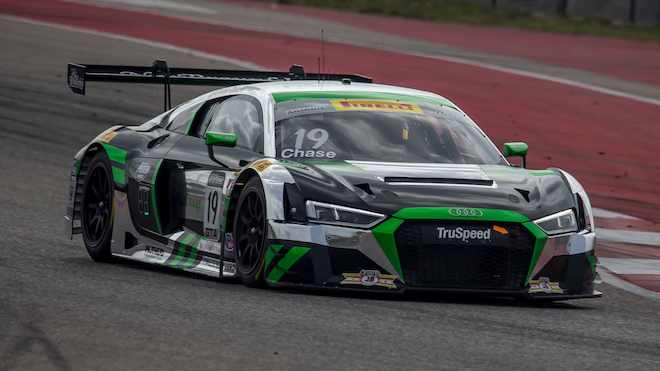 “Not only is it exciting for me to return to Long Beach competition, it is great to have Trench Shoring and K1 Speed with us as partners this weekend,” Moran said. “The Toyota Grand Prix of Long Beach is a legendary event and bringing local companies to the race is tremendous for everyone involved. I have had some heartbreaks at Long Beach including that 2005 race on the last lap. But I’m anxious for this weekend.”

TruSpeed Autosport, located near the John Wayne Airport in Costa Mesa, rounds out the local angle for the Moran effort this weekend too. TruSpeed Autosports won the 2011 Pirelli World Challenge GT championship with Patrick Long driving.

“It is awesome to bring Rocky back to the Long Beach event with one of our TruSpeed Autosport Audi R8 LMS,” said Tyler Tadevic, owner of TruSpeed AutoSport. “Rocky has had some strong runs at Long Beach and he did a great job in the recent test. We are excited to get him back on the Long Beach track and challenge for a front-running performance. With Parker and Rocky working together, I think we can have a strong showing this weekend.”

Moran will compete in the GT class at Long Beach which is set for practice at 3:30 p.m. PT on Friday (April 13). Qualifying is Saturday at 9:20 a.m. PT with the 50-minute GT/GT4 Sprint event scheduled for Sunday at 10:00 a.m. Both qualifying and the race sessions will be live streamed at World-Challenge.com/streamvideo.