Logano awed by visit to Dover Air Force Base

Logano awed by visit to Dover Air Force Base

Joey Logano crashed Wednesday afternoon – but it wasn’t in a racing setting.

The Team Penske driver was easily caught and then brought down by six-year-old Karlo, a Belgian Malinois military dog at Dover Air Force Base. Logano spent nearly six hours touring the base and meeting an abundance of airmen while promoting the upcoming Monster Energy NASCAR Cup Series race at Dover International Speedway.

The final stop of the day was with the military working dogs. That’s where Logano donned a protective suit and let Karlo demonstrate his training.

“It’s been incredible. Anytime you get to [visit] these bases, it’s special and as a civilian, sometimes we’re all probably guilty of taking our safety for granted or some of the privileges we have,” Logano said. “When you see the amount of detail, the amount of work, amount of sacrifice that our military puts in for us, that’s pretty impressive. It’s amazing. These moments when you’re about to come and meet some of the individuals that are fighting for us and you see the back parts of their job and everything they do to prepare and be ready for combat at any moment, it’s impressive and it’s the least we can do to shake their hands and say ‘Thank you.’

“I see the things they do and think there is no way I could ever do that; I don’t think I’m wired to do that, but these men and woman can.”

Many of those who met Logano are eager to serve their country, and several are NASCAR devotees. Staff Sgt. Chris Sharlow was one example. Before giving Logano a tour of military equipment he made sure to admit he was a huge fan. Sharlow was one of many who received an autograph or picture.

In addition to learning about various parts and responsibilities carried out at Dover Air Force Base, Logano joined a few airmen for lunch and soon found himself trading stories about various subjects. And even though he was given a full day, Logano didn’t go home empty-handed.

Getting a chance to meet several of the men and women who protect our freedom at the Dover Air Force Base #22DaysToDover #NASCAR pic.twitter.com/Xx9wkiJrsz

The Fabrication Flight crafted unique bottle openers for Logano as well as a metal trophy of sorts featuring an eagle on a globe. On the inside of the globe was the No. 22 car.

Joey was presented with a cool ‘trophy’ a group here made for him, which even has his car on the inside. He then signed a larger version pic.twitter.com/l7pTlVCJP4

“It’s incredible,” Logano said of the gifts. “I feel guilty taking it because I’ve already taken too much, so I don’t really know how to accept something like that. They do so much and then when you come here and learn more about what everyone does, you’re like, that’s plenty! It’s more than I know what to do with.”

Even with the appreciation and seriousness of the visit, racing was not far from anyone’s mind. In addition to the comparisons of “teammate” between racing and the military, at one stop Logano was questioned by a large group of airmen about his favorite track, steering wheel brand and if it’s hard to go from driving on the track to the highway. 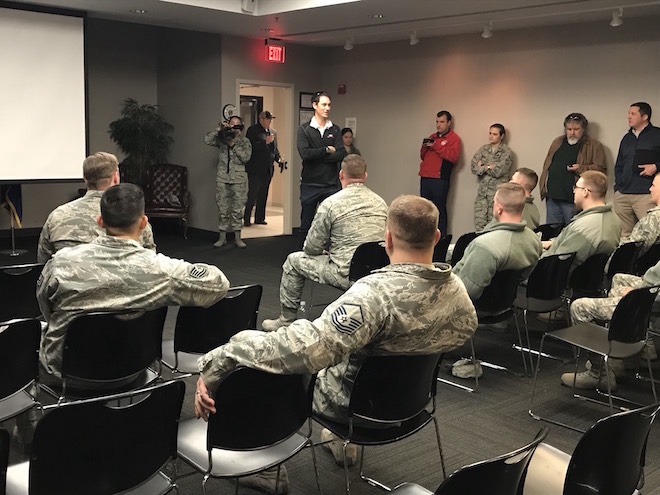 Considering how well Logano and the No. 22 team have been running this season after his self-described “horror film” 2017 season, the back-and-forth brought many smiles and laughs. Going into this weekend’s event at Bristol Motor Speedway, Logano sits second in points with six top-10 finishes in seven races and an average finish of 7.6. 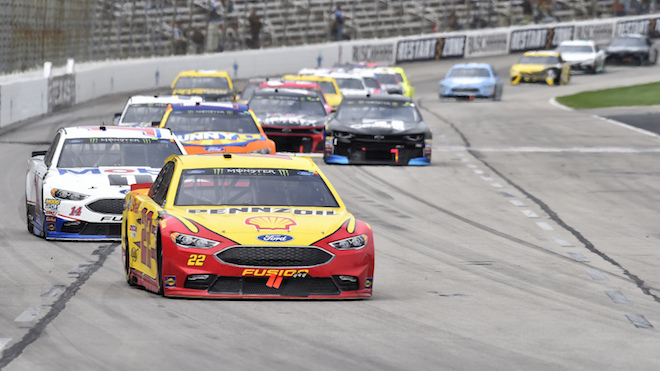 “Second in points, which is nice. No wins, that’s not so nice,” said Logano. “We’re consistent … we’ve been solid. Our pit stops have been good, our team has been on point and I think that’s a big deal. We need to get faster, that’s the other piece that we’re missing right now.

“We’re kind of fourth through eighth, that’s where I feel the Team Penske cars are. We’ve been consistent and scoring stage points, we’re scoring a lot of points to put us second. But we also know how important wins are and we want to be able to break through and get that win again.”

Is it hard to believe it’s almost been one year (April 30 at Richmond) since Logano last pulled into Victory Lane?

“Oh, I know. I know,” he laughed. “It’s been a long time, so you start to go through that dry spell and ‘when can we win again? What are we going to do?’ but it’s not like we’re running 20th or 15th or even 10th. We’re running better than that. So, it kind of gets you by knowing that it’s coming. It’s just going to take the right opportunities and we got to get faster, we got to keep working at it.

And that’s the only kind of running Logano wants to do going forward. Where there is no Karlo looking to latch onto his elbow.