The Monster Energy All-Star Race is getting a makeover and it may impact the future of racing at 1.5-mile tracks.

On May 19 the exhibition race at Charlotte Motor Speedway will be 80 laps split into four stages. The breakdown of the stages is 30 laps, 20 laps, 20 laps and a 10-lap shootout for the $1 million prize.

The race will be run under normal race procedures seen each weekend in the Monster Energy NASCAR Cup Series, meaning pit road with close with two laps to go in a stage, there will be overtime in stages one, two and three, and the final stage will have a green flag finish. There is also no mandatory pit strategy. 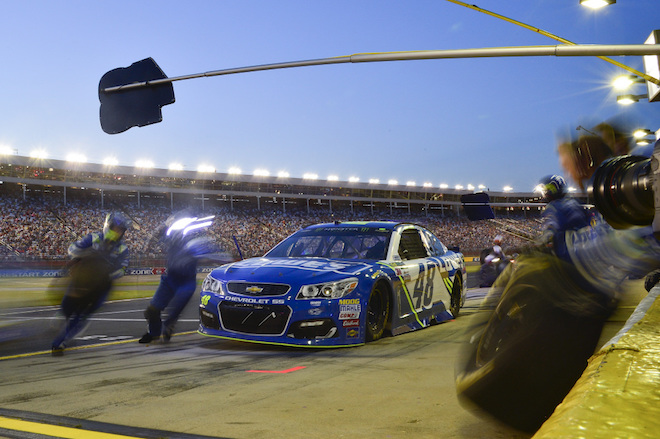 The biggest change for this year’s event is the race package. NASCAR and Charlotte collaborated on using a package mirroring the one the Xfinity Series used last season at Indianapolis Motor Speedway. It consists of:

After the Xfinity Series race at Indianapolis last season there was widespread compliments about the racing, which was widely perceived to have been more entertaining. Statistically that translated to a record number of race leaders, lead changes and green flag passes for the lead.

Both NASCAR executive vice president and chief racing development officer Steve O’Donnell and track president Marcus Smith agreed this was a simpler format for the fans. When digging into the rules package, O’Donnell said he expects a reduction of about 400 horsepower and the speeds to be in the 170mph range.

“One of the things we’ve heard from the fans loud and clear is, each new year it’s a different format and try not to make it as complicated,” said O’Donnell. “[This is] just as straight up as possible with the race. Shorter stages. That’s really what went behind it.”

Smith said this format and rules package had been in discussion for months, and O’Donnell credited Smith with “coming to us” to make things happen.

“It’s going to be great,” said Smith. “I honestly think when you look back on the All-Star Race you can easily see how it’s been an innovation platform for NASCAR, with the side-by-side All-Star style restarts that we use every day now, to the stages that we run in every race. Now we’re going to do something else that may very well make that kind of change happen in the whole sport.”

Smith was referring to the rules package, which NASCAR is not ruling out possibly using again in the future – specifically, when it comes to improving the racing on mile-and-a-half tracks. However, O’Donnell cautioned that while “never say never” about the package re-appearing again after the All-Star Race, the sanctioning body is focused more toward the future.

“We’re looking at it purely as something that, hey, let’s test it out,” O’Donnell said. “It’s something we have obviously tested and feel good about. We wouldn’t just throw out an experiment.

“Directionally we feel good about [this package], but it’s something we want to learn from and then probably apply more toward 2019. Similar to what we did with the Xfinity package.”