Scott Hargrove has always set his sights on competing at the famed Toyota Grand Prix of Long Beach, which stages its 44th edition this weekend (April 13-15) in the streets of the Southern California harbor city.

But the 23-year-old racer from Tsawwassen, British Columbia, Canada, believed he would be driving an IndyCar when he made his Long Beach debut after a successful Mazda Road to Indy career in USF2000, Pro Mazda and Indy Lights.

“It’s interesting that I will make my debut at Long Beach next week in a Porsche,” said Hargrove, the impressive double-sprint race winner last month in the streets of St. Petersburg. “I always thought I would take my first Long Beach laps in an IndyCar. But it didn’t work out that way, and I am very excited to be coming to that famous race in the Pirelli World Challenge.”

Hargrove looked to be on the fast track to the Verizon IndyCar series as a teenager with strong performances in the single-seat open-wheel cars, but, as happens to many young drivers, funding for the next level was crucial and Scott just didn’t have enough to move up.

So, Scott followed in his father, Jim’s, footsteps in the sports car competition, as Jim competed in a variety of sports car series in North America.

“I know how the game works in motorsports and Canadians have always had assistance to get to the IndyCar level,” he said. “I just couldn’t find enough and the Pfaff Motorsports/Castrol Porsche 911 GT3 R team has given me the opportunity to compete against many of the world’s best sports car drivers. It’s very exciting.” 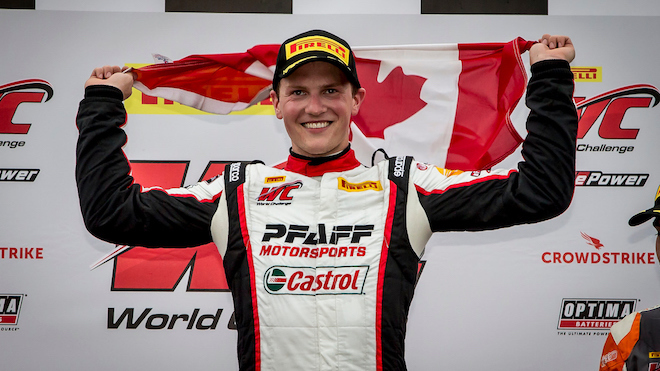 As was Hargrove’s showing in his PWC debut at St. Petersburg, as he came from the rear of the field in Round 1 (due to a qualifying mishap) and captured his initial 50-minute GT Sprint race. In that event, Scott set the fastest race lap and started on the pole in Round 2. He jumped to the lead and never looked back, scoring 51 of 52 possible points in his PWC debut.

“It was a great weekend, a little unexpected after Saturday’s qualifying (incident) but it was a great comeback for the team, Pfaff Motorsports,” Hargrove said. “In the second race, there was a much better view into Turn 1 at the start. I had to be a little bit smarter at the start. I didn’t overshoot the corner too much. Then our initial pace was amazing. It was really nice to have an air pocket (gap) and take the second win of the weekend.”

Hargrove made another career first when he drove with Porsche veteran Wolf Henzler in Rounds 1 and 2 of the GT SprintX series (60-minute, two-driver race) at the Circuit of the Americas (COTA) two weeks ago. Always a lone driver in his racing events, Scott had to learn how to perform the quick “driver change” with Henzler in the heat of the competition. Plus, it was his first race ever at the state-of-the-art F1 racing circuit in Austin, Tex.

“The whole driver change was completely new to me,” he admitted. “I was always in an open-wheel car or a Porsche GT3 Cup car for sprint racing. I’m very glad that a veteran like Wolf was able to guide me through that new situation. And I was trying to learn the COTA track at the same time. But we ran a good, smart race and now I’m leading the overall GT points entering Long Beach.”

Hargrove and Henzler placed fourth and third in the COTA rounds (1 and 2) with Scott now holding a seven-point margin over Ferrari’s Toni Vilander. Fellow Canadian Daniel Morad ranks third in points just nine back of Hargrove.

“I have driven around Long Beach a ton of times on iRacing and the simulator,” Scott said. “It’s the only street race in iRacing and I love driving the track. Obviously, it will be much different from iRacing to the actual track, but I’m anxious to get the track, do the track walk and then drive the circuit for the first time. I seem to have strong runs on the street circuits.”

And Hargrove will finally reach his goal of racing at the historic “Roar by the Shore” event, and, hopefully finding Victory Lane on Sunday (April 15) in the Pirelli World Challenge Round 3 50-minute GT Sprint race.

“I may be new to the PWC series and to the Long Beach track, but to win there would be the ultimate thrill of a racing driver,” he said. “Plus, I want those valuable points as we are racing for the GT overall series title this year.”

Road to Indy 42m ago