FIA World Rally Championship leader Sebastien Ogier stormed into the lead of the Tour de Corse, the home round of the series for the Frenchman, but his fellow countryman and rally legend Sebastien Loeb (pictured) is already out of contention.

Ogier was able to extend his advantage at the head of the leaderboard when Loeb, running second, went off the road in the second stage. He therefore takes a 21.1-second lead over Kris Meeke going into the afternoon’s repeated loop. Thierry Neuville holds third in a close fight with fourth-placed Ott Tanak.

The fourth event in the 2018 series has brought the contenders to the Mediterranean island of Corsica for a classic on the calendar and the first pure tarmac round of the season. While the event kicked off last night in Bastia, the competitive element got underway this morning with a daunting 49-kilometer stage followed by a shorter 15 kilometer test before returning to mid-day service. 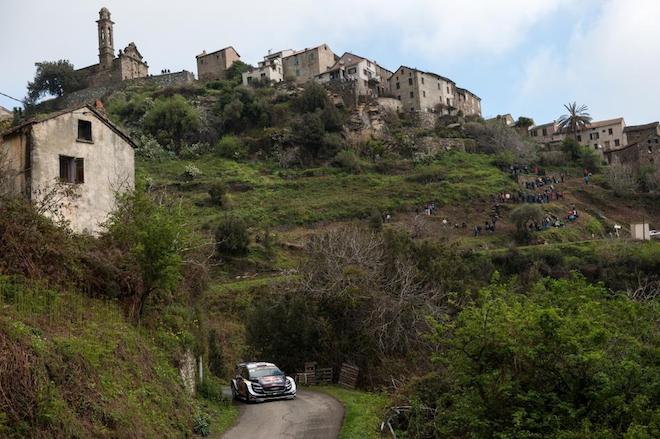 Ogier showed his intent in the opener, winning one of the longest stages of the rally to establish a 9.7-second advantage over multiple FIA World Rally champion Loeb. The rivals looked set to continue their battle until second-placed Loeb went off the road near the start of the second stage, his C3 WRC firmly stuck in a deep ditch. The Citroen team still hopes to restart Loeb tomorrow following repairs, but his chances of a top finish are gone.

Ogier went on to win this test, extending his advantage now over Meeke. The Northern Irish driver was distracted in the second stage when his intercom kept cutting in and out but the Citroen driver is poised in second and watchful of a chasing Neuville just 2.3 seconds further adrift. The Belgian wasn’t happy with the handling of the car this morning but needs to push hard to also maintain his advantage over Tanak, the lead Toyota driver in fourth. He heads Elfyn Evans, who is performing well with replacement former world champion co-driver Phil Mills while Daniel Barritt continues his recovery from their accident on Rally Mexico last month.

Dani Sordo holds sixth ahead of Esapekka Lappi, the Finn competing in a WRC car on the island for the first time. Teammate Jari-Matti Latvala struggled with the handling of the car in wet sections in the opener and lacked confidence under braking in the second stage; the former Tour de Corse winner is already 53 seconds adrift of the lead. Andreas Mikkelsen is also hot on his heels after a disappointing start and a spin in the first stage. Bryan Bouffier rounds out the top 10.

The FIA WRC 2 Championship is being led by Skoda’s Jan Kopecky, the Czech driver winning the opening stage. He has a 2.7 second advantage over Frenchman Stephane Lefebvre, who is debuting the new Citroen C5 R5 and won the second stage. In the FIA Junior WRC Championship Terry Folb has taken the early advantage and heads Italy’s Callum Devine going into the afternoon loop of stages.