A pair of 25th anniversaries span the next two weekends of IndyCar racing. Thanks to a lot of effort by the folks at ISM Raceway, the event surrounding Saturday night’s Verizon IndyCar Series race in Phoenix has been transformed into a throwback celebration at the venue where Mario Andretti scored his final IndyCar win. And when we head to Long Beach the following weekend, we’ll hit the quarter-century mark since Paul Tracy took his first victory in the former CART IndyCar series.

Taking nothing away from Mario’s triumph in the desert, we came close to celebrating the 25th anniversary of Tracy’s first and second wins on consecutive weekends back in 1993 but, as the lap chart shows, PT only completed 161 of the requisite 200 tours around the one-mile Phoenix oval.

With a staggering two-lap lead over the entire field, the budding star was in his own world with the No. 12 Penske PC22-Chevy. True domination like Tracy authored was produced by the aggressive intensity that would go on to become his greatest strength and weakness in the years ahead. Despite holding a two-mile advantage, PT kept the afterburners lit, but his breakthrough performance was unwound by a mis-timed pass on his close friend Jimmy Vasser in Turn 1. As the tail of the PC22 went around and pitched PT backward into the barrier, the Canadian phenom’s big date with Victory Lane was rescheduled.

“I was going into the turn when I came up on [Vasser’s car], which was going slower,” he told On Track magazine after the race. “He moved over, I thought to give me room to pass. I took my line and committed going into the turn. Then he came down and I had to pinch off the corner and back off. At that point, the car spun.”

Vasser, in a separate post-race interview, said Tracy’s version of the incident was different from his own.

“I guess some people are saying I had something to do with Tracy’s crash,” he said. “I don’t think we were involved. I saw him coming in my mirrors, but when I got to the turn, I never saw a wheel or a wing to the side. I thought he was going to pass me on the outside coming out of [Turn 2].”

As the safety crew cleaned up PT’s expansive debris field, Penske teammate Emerson Fittipaldi assumed the lead behind the pace car. When the race went green on Lap 171, the Brazilian sprinted away from Andretti in second, but what Fittipaldi didn’t know was the back of his PC22 had been hit by some of the debris from Tracy’s car. By the time he reached Turn 3, his car spun and smacked the wall.

“It didn’t appear to be a problem while we were running under the yellow, but after the restart, as I approached Turn 3 the car vibrated and I lost control,” Fittipaldi said.

The fratricide ruined Roger Penske’s day as Tracy’s surefire win turned sour, and his second entry – poised to capitalize on PT’s mistake – returned dangling from a tow truck after broken parts from one PC22 took out the other… 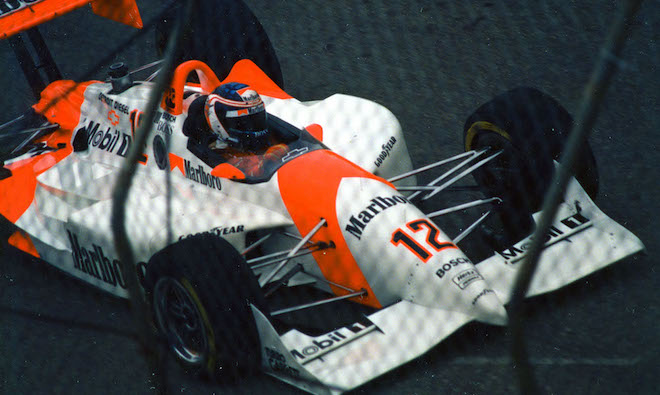 With clear road ahead on the final restart, Andretti was left in a prime position to capture his first win of the 1990s.

“I figured you put it together and it might be a good second place today, because Emerson was going quick enough,” he said 25 years ago. “That’s when a little prayer of thanks went to the man upstairs. I didn’t know what happened to [Fittipaldi], but oh my gosh, I can’t believe this. But sometimes that’s motor racing and that’s the way it goes.”

Dick Simon Racing’s Raul Boesel would follow Mario home one lap down in second, and Vasser, still in the early stages of his IndyCar career, earned his best result to date with a trip to the podium in third, three laps arrears for Hayhoe/Simon Racing.

Andretti readily admits his final Indy car win was a fortuitous happening at the age of 53. But if we consider how many times the phrase “And Mario’s slowing down” was uttered throughout the years, the parting gift from Tracy was, in some sense, an overdue present after all the big wins that were surrendered.

“I saw a couple crashes in front of me which I kind of liked, especially since the guys didn’t get hurt which helped me anyway, but I felt that, in all honesty, I lost some races like that and I think that win was a little bit of a gift for sure, and you could see that,” the racing icon told RACER. “But at least I was there to capitalize and that’s it. But I think at the age that I was, I still felt that I was still competitive and that was important for me. Still very precious.”

With some time to reflect on Phoenix 1993, Tracy has come to appreciate the outcome for what it has come to mean for Andretti and IndyCar racing as a whole.

“I guess I could say I handed Mario the last win of his career,” he said on the Week In IndyCar podcast. “I threw it away … it was just another piece of the puzzle of my career, and I can say I went on to the next week at Long Beach and got my first win at the Long Beach Grand Prix, so I can’t complain.”

As someone who has been bestowed with countless awards and honors, Andretti was surprisingly moved by ISM Raceway’s grand production to celebrate his last IndyCar victory.

“It’s amazing,” he said. “I’m so totally, totally flattered about this because, again, I know it’s all promotion and that’s what it’s all about, but at the same time the way they’re doing it, the way I understand what they’re doing for it and just helping celebrate, obviously, something that’s very important to me and knowing how Phoenix as a venue was so, so instrumental in my career because of all the tests, so much testing that we did there and so forth.

“All of a sudden, having this coming back, this celebration, and obviously showcasing or giving me this type of recognition, it’s beyond what I could ever expect. Obviously, [I] never expect [it], but that’s what’s beautiful about our sport.”

And while some have mistakenly characterized Phoenix 1993 as Andretti’s last racing win, it’s worth noting that the 24 Hours of Le Mans in 1995 owns that distinction. The 55-year-old Mario came home second overall with Eric Helary and the late Bob Wollek, and first in the WSC class, driving a Courage C34-Porsche prototype, which stands as his farewell to the top step of the podium.

“That’s right!” he said with a smile. “But nobody gives me credit for a win there … ‘that was a class win.’ I have the first place trophy in my trophy case. A class win is still win, right?”