What Aaron Telitz needs more than anything right now is racing’s version of a wedding registry for the Dallara IL15 chassis.

The race-winning Belardi Indy Lights driver finds himself in the unfortunate position of having to raise the funds to replace the IL15 he destroyed in a qualifying crash at St. Petersburg – all while the 2018 season is under way – and he’s slowly earning and saving the dollars to make good on the damage incurred in Florida.

Telitz had secured pole for Indy Lights round 1 at St. Pete, setting a new lap record along the way, and was on his way to pole for Round 2 when a mistake left his Belardi Dallara looking like an abstract painting.

With his sponsors taking care of the budget to race for the season, the big and unexpected monetary hit left the Wisconsin native with a new and formidable debt in the six-figure range. And since he comes from ordinary means, making team owner Brian Belardi whole financially, as he pursues the $1 million Mazda Road To Indy advancement prize that comes with winning the championship, is now part of Telitz’s pressure-packed season.

“St. Pete started off excellent with new pole records, you’re trying to shave time and coming within inches of the wall, and when thing go wrong, they go very wrong,” Telitz, who recently tested an IndyCar for Schmidt Peterson Motorsports, told RACER. “Pretty much destroyed an entire Indy Lights car. If people don’t know, it costs hundreds of thousands of dollars to replace an entire car.”

With his car in tatters, the polesitter missed the first race as Belardi sourced a replacement from Carlin Racing to prepare for Telitz to use in Round 2, where he was taken out in the second corner on the opening lap. Fortunately, the race crash was small in comparison to the qualifying incident.

“As a racecar driver coming up the Mazda Road To Indy ladder, the first thing you do when you crash is assess yourself to make sure you’re OK, and then the next question you ask yourself is, ‘man, how much is this going to cost?'” he said.

“We know how much wings are, but when you see your engine is broken, your gearbox is in three pieces, you know things aren’t looking so great. And when the number gets to as big as it is on crash damage, I stopped thinking of it as money and just as a number to get to, otherwise, it’s too depressing. And now it’s just trying to figure out ways to make that number happen.”

The sponsors that support Telitz’s Indy Lights effort have contributed some to the crash fund, but as he explains, at the MRTI level, an abundance of spare cash is not part of the norm for most drivers.

“They’ve already done everything to get me here for the year, and they’ve been incredible to me with trying to help with this,” he said. “But what do you do? Take the budget to cover the crash or keep racing and look to pay it off as the season continues? I had to go back and tell my sponsors I’d ruined an entire race car. The biggest crash I’d had before was a wing and a suspension corner, and I paid for it with prize money I’d earned. But this was a much different situation.

“I am ridiculously lucky to have Mr. Belardi as my team owner; the moment after the crash, he was straight away looking for a replacement car to buy to get me out for the second race. He wasn’t talking about money; he only cared about keeping my season going. I can’t speak for the other Indy Lights teams, but I don’t know how many drivers have an owner like him who would buy the car first and worry about getting repaid for it after. He’s amazing.”

And this brings us back to Telitz needing something like a Dallara IL15 registry where friends and fans can go in, pay for the hundreds of parts and pieces that comprise the new car he’ll race at the next round in Barber Motorsports Park, and draw down his debt to his team.

Since that option doesn’t exist, he’s gone a different route with racing apparel maker Styled Aesthetic. As the rare Indy Lights driver to have his own line of T-shirts and associated racing merchandise through the company, all of the proceeds from Telitz’s product line will go toward the crash fund.

“They’re a screen printing business that are used by a lot of IndyCar and sports car teams, and the owner happens to be my driving coach, Steve Welk, and he does all of my stuff as well,” he said. “And Styled Aesthetic has also done a deal for merchandise with Generic Racer, which is pretty popular, and they’re also contributing proceeds from their line to the fund. You can go and buy a ‘I’m faster than Aaron Telitz’ shirt, or some of mine, and it will help directly. There’s also a donate button in there if people don’t want to buy gear.”

Aaron is one of the most talented/deserving drivers out there. He’s built his career on hard work and heaps of talent. All GR @StyledAesthetic sales go to help Aaron rebound from a tough weekend at St Pete. https://t.co/chPDMsQMWE

Rather than complain about his predicament, Telitz has gotten to work on raising the money to repay Belardi through the aforementioned merchandise sales and donations, through driver coaching, and anything else he can think of this year. And with most of his income going toward the crash fund, Telitz has taken a, well, less expected route to try and feed himself and keep a roof over his head.

“Do you know what else I have to offer?” he said with pride. “I do oil paintings! I don’t know if a lot of people know about it, but I can do landscapes just like Bob Ross, everyone’s favorite painter from Netflix. I take requests and offer the ones I do on my own on Twitter and Facebook. People [direct message] me and buy them. I’ll do whatever it takes to get this situation behind me.” 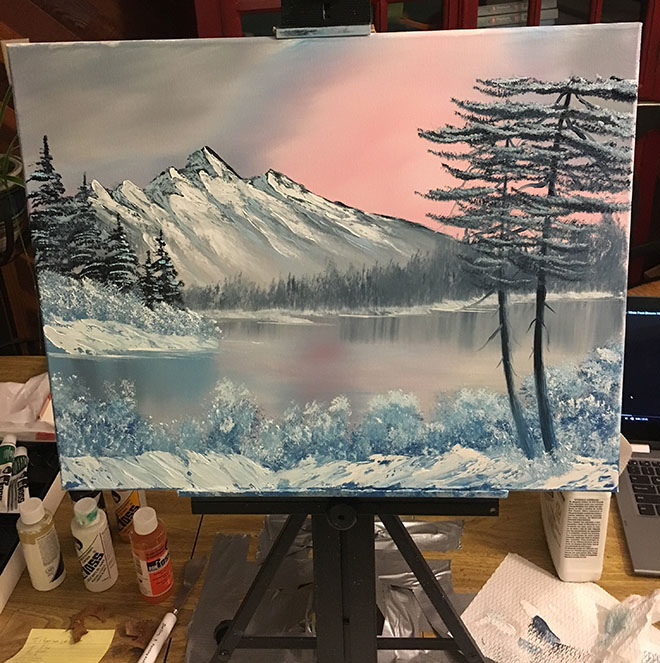 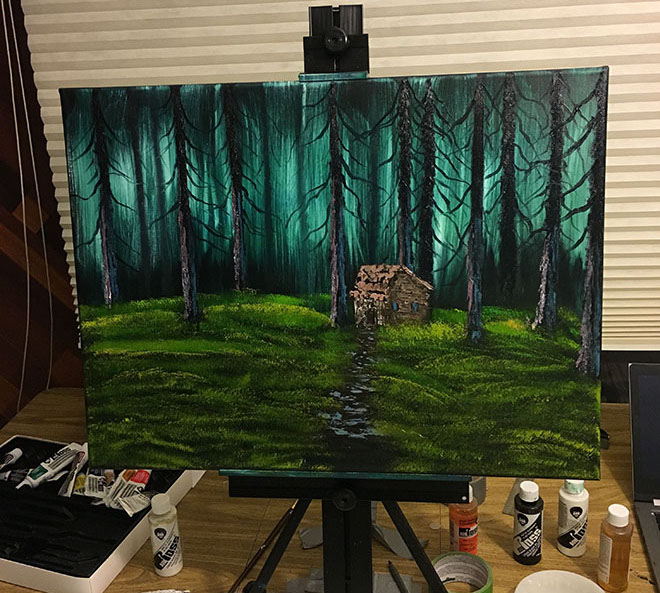 Off Road 3hr ago ET