With the advent of the new TCR class, there are now three homologated platforms racing in Pirelli World Challenge – GT3 in the GT category, GT4 in GTS and now TCR. They are three different ways to go racing in production-based cars that are homologated, specified and – at least in theory and averaged out over a variety of tracks – equal. Three different ways to purchase a ready-built racecar straight from the factory (or the factory’s designated builder).

Ryan Eversley is one of the few to have raced all three, and perhaps the only person on the planet to race all three in the course of a week. He raced an Acura NSX GT3 for Honda America Racing Team at the Mobil 1Twelve Hours of Sebring on March 17. The following weekend he was at Circuit of The Americas, where he did double duty in World Challenge, racing the Case-It Racing by Flying Lizard Audi R8LMS GT4 with Adam Merzon in GTS SprintX and the RealTime Racing Honda Civic Type-R TCR, in which he scored a pair of third-place finishes. He also raced RealTime’s NSX GT3 last September at COTA, so he has experience in all three at the same track.

The striking difference between the three is lap times. The gulf between GT3 and GT4 is wide; for Race 1 at COTA, Mike Skeen put the Lone Star Racing Mercedes-AMG GT3 on the GT pole with a time of 2m05.664s, while Harry Gottsacker scored the GTS pole with a 2m17.527s in his Racers Edge Motorsports SIN R1. That 12-second margin is striking, especially when one considers that GT3 and GT4 cars, depending on the manufacturer, are sometimes based on the same road car platform. The TCR pole time, set by Mark Wilkins in the Bryan Herta Autosport with Curb Agajanian Hyundai i30 N, was a 2m18.914s, less than 1.5s off GTS. Eversely’s best race times in the Audi GT4 and the Honda TCR was less than half a second off.

“The way they do the laps is a little bit different,” Eversley explains. “The rolling corner speed for a TCR car is actually pretty high. They are pretty similar in speed but they do the laps completely differently. For every TCR session [at COTA], I was almost completely flat through Turns 17-18-19 around that triple carousel; in the GT4 car you can’t even come close to doing that. So it’s pretty neat how [the TCR cars] make the speed up, but they are probably more fun to drive because they have that kind of aero and you can really push the limits of what is allowed.” 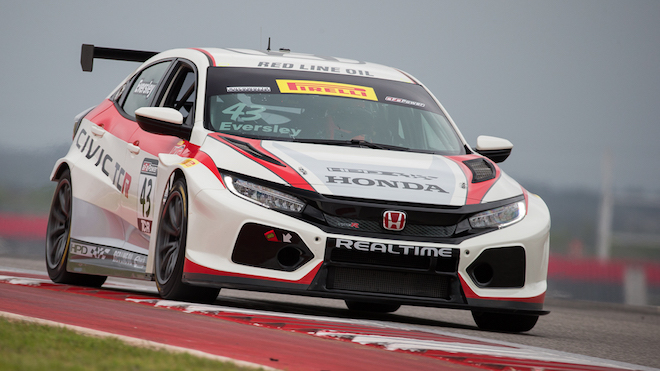 It’s the aero that plays a big difference between GT3 and GT4. In the case of both the Audi and Mercedes-AMG GT3 and GT4 platforms, they are based on the same road car using the same engine. In GT4, that engine is detuned to make less power. (In these cars, the GT3 racing versions make about the same power as their road-going counterparts; GT4 is 50 or so fewer horsepower.) Where the speed differential – and price, with GT3 cars being 65-100 percent more than a GT4 car – largely comes from is more lightweight carbon fiber body pieces in the GT3, and much more sophisticated aerodynamics.

“The big thing is the aero,” Eversley says. The first time I drove the GT3, and realized you couldn’t run nose-to-tail with somebody, I thought, ‘Wow, these things are super aero-dependent.’ If you look at the speeds we were able to carry through some corners – I remember in the NSX last year we were doing something like 143mph through the Kink at Road America. It wasn’t flat, but it was damn close. If you tried to run close to somebody in that corner, it was something like 130mph because you were losing the front end and you wouldn’t make the exit. So it was a 13mph swing – but you think about that, 143mph at the slowest part of the Kink at Road America in a GT car? That’s cranking. They are very aero-dependent, and I think that’s where the difference is. Obviously that means a lot more carbon fiber bits and a lot bigger body kits on them, so I think that’s where the price also starts to come from.” 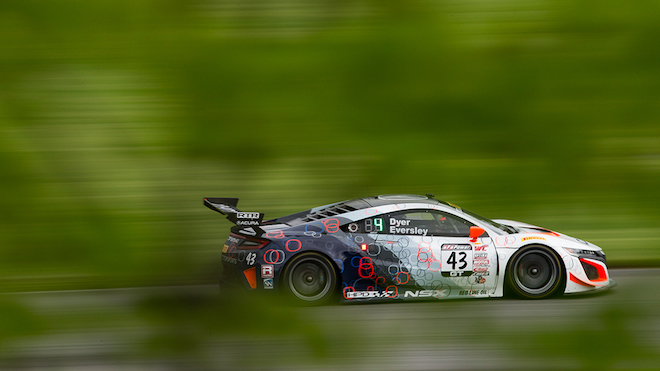 Eversley adds that there is little aero wash in GT4, and none that he could feel in TCR. One key difference between GT4 and TCR, though, is the lack of ABS, as well as TCR cars being front-wheel drive.

“You can’t be as brave on the brakes because you can get lock-ups and you don’t want to slam into the back of somebody out of control or flat-spot a tire; that would cause you to lose quite a bit of pace and potentially have to go to the pits for a new one. The GT4 car has ABS so you don’t have to worry about it, so you can be a little bit more aggressive on the braking. [COTA] has some big brake zones, but if you get creative with your braking lines, you can make it really hard for somebody to get by.

“In the GT4, I noticed that it was pretty much like sedan racing. A lot of people were outbraking each other and going side by side; whereas in the TCR, because the brake zones are a little harder to be aggressive, it was more straight-line racing into those corners. But then it was the race to the next one. You were getting a better run off the corner, and with the class being all front-wheel drive, it really comes down to who can get the wheel straight and get off the corner without destroying the tire as bad. In the GT4, we just kind of push the entire time and the tires didn’t really go anywhere.”

Eversley’s heroes growing up were racers like A.J. Foyt and Mario Andretti, who would drive anything, anytime, anywhere. So he relishes the opportunities he has to drive a variety of cars, and says he doesn’t see TCR as a step down from GT3. In fact, he’s really enjoying racing the Civic Type-R TCR.

“They are so fun to drive,” he summarizes. “It resembles so much of the street car version and that’s where we all got into this as kids. When I was in high school the Civic Si had come out and I wanted one of those so bad. If you saw something like a TCR at that time, you would have been excited as hell.”