Looking at the big picture, AJ Allmendinger said he was happy with his eighth-place finish at Martinsville Speedway.

“But I’m a race car driver, so I always want more,” he told RACER.

The half-mile Virginia facility, nicknamed “The Paperclip,” has been good to the JTG Daugherty Racing driver. Allmendinger now has seven top-10 finishes in 20 Martinsville starts, and four top 10s in the last five races. Monday, he rode that momentum to his best finish – and second top 10 – of the season.

“It’s a tough place and it’s a place that I’m always nervous going into it because anything can happen. But I enjoy it.” 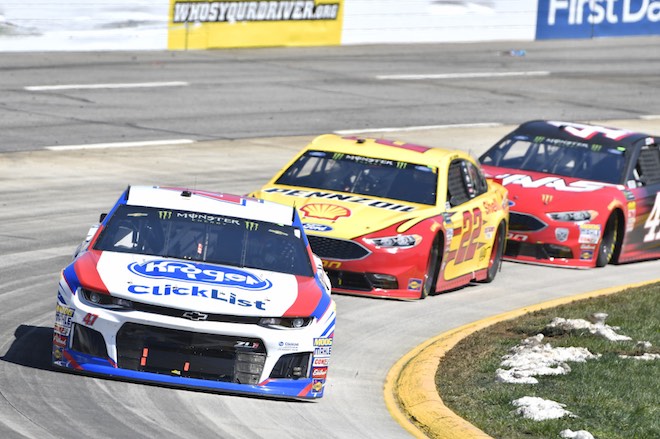 According to the Fox broadcast of the STP 500, Allmendinger spent more time running in the top 10 on Monday than he had in the previous 35 Monster Energy NASCAR Cup Series races. He got as high as fifth on the leaderboard although, unfortunately, the last set of tires on his No. 47 Chevrolet didn’t agree with the car and it was bouncing around quite a bit.

“I thought the second to last run, near the end of it, we were pretty good and I was making moves right on the edge of the top five,” Allmendinger said. “I feel like when we’re at our best here – obviously we’ve shown we have a chance to win, we can run in the top five, just those Fords were really good; a couple of the Toyota cars, too.

“We weren’t far off, we’re making gains. We’re on our own here, it’s the first time in how-many-years we’ve been on our own with no real alliance. Hendrick [Motorsports] has helped us a lot with the sim and stuff, but we’re learning a lot.”

Not technically aligned with Hendrick, the two-car JTG team of Allmendinger and Chris Buescher handles its own cars. And while Allmendinger is highly complimentary of what HMS has done for the team with simulator information, he admits the results have not yet shown that. Aside from his 10th-place finish in the Daytona 500 and his run at Martinsville, Allmendinger has not placed higher than 21st. Which is why he knew that taking advantage of a place like Martinsville and earning a decent finish was important.

“It’s basically sim,” Allmendinger said of the Hendrick relationship. “We’re on our own when it comes to building the race cars and all that. But I have to say, they’ve gone above and beyond what they’re supposed to help us with. They do a lot to go out there and make sure we’re at least in the right direction.

“Kenny Francis [of HMS], who I’ve worked with in the past at Petty, he’s helped us out a ton. But in general, when we get back to the race shop it’s on us to build these race cars. We’re doing a good job, the results haven’t shown it this year; we’ve definitely got more speed than we had last year, but we’re learning all together. And it’ll make us closer in the future, for sure.”