Early mishaps slowed the 37-car field for the first six laps Saturday, with the pole-sitter Gottsacker holding the top spot until he surrendered the lead with his lap 7 pit stop.

Buford took the lead on lap 12 after Maxwell brought in the No. 55 car for the driver change. Buford’s smooth race to the checkered flag capped the race as Gottsacker charged through the field in the No. 69 Racers Edge Motorsports SIN R1 GT4. Gottsacker, the 18-year-old from San Antonio, drove solo with a weight penalty in his race car to take the runner-up at his home track.

“I saw Harry catch the Camaro pretty quickly, so I knew time would be my enemy,” said Buford. “Luckily there wasn’t a lot of time, so it was actually my friend since we didn’t have an outright pace. We just put together the best pace that Scott and I could do combined, and it was just enough.

“I think another lap or two and we probably would have fallen just like the Camaro did. The Mustang is just too heavy, but our biggest strength is consistency, and that’s the way we won today.”

“We didn’t have the fastest car, but everything went flawlessly from a team point of view and the pit stop was good,” added Maxwell. “I didn’t really do too much. I had the two green laps because of all the cautions so my role was pretty easy. It was just to hand Jade a good car, after two laps it was just nice and warm for him. We had a good pit stop, everything went well, Jade drove a flawless last stint. I think we were a bit fortunate, but that’s the way that it works. The car felt good, but it was frustrating behind the pace car for the first twenty minutes.” 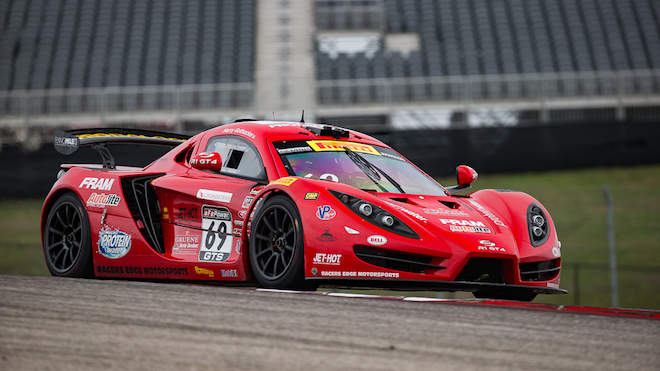 “We had a little bit of a miscommunication on our pitstop,” said Gottsacker. “There’s not much I can say about that. It was partially my fault, partially some of the whole team’s. But, the car was great, especially in the second stint of that race. It was really consistent. It’s awesome to race at your home track! On the cool down lap, I could see my family in the bleachers, jumping up and down like crazy. I love this track.”

Staveley, a double winner in the Am division at St. Petersburg two weeks ago, made the pass on the No. 92 Classic BMW BMW M4 GT4 of Chris Ohmacht/Toby Grahovec on lap 13 and held the advantage to the finish in his Ginetta G55.

“There are some pluses and minuses to driving solo in the SprintX format,” said Staveley. “I was calm during the pit stop and I adjusted my brake bias. I knew what the track conditions were when I went back out after the stop. But I had to run qualifying type laps to stay in the lead of the Am class. And finishing fifth overall is a great run for the Ian Lacy Racing team.”