The infectious enthusiasm found within Aaron Telitz after his first Verizon IndyCar Series test could benefit the young American if and when he gets the opportunity to race in the big leagues.

The Belardi Racing Indy Lights driver spent part of Friday in James Hinchcliffe’s No. 5 Schmidt Peterson Motorsports Honda on the Indianapolis Motor Speedway road course, and by the Wisconsin native’s accounts, the cold temperatures and pressure surrounding his IndyCar debut did not dampen the joy he found from inside the cockpit.

“The temperature didn’t distract me a bit; I would have gone out in the morning when it was 30 degrees if they let me, but when I did get out, the first thing that came to mind was how fun it was to drive,” he told RACER. “I was there to do work for the Schmidt Peterson team, but it was still awesome to drive on that track and to drive their car. And I didn’t stall it my first time leaving the pits. I aced my first pull-away!”

The 2016 Pro Mazda champion went on to win two Indy Lights races last year and is back for his second season with Belardi, where the driving characteristics of the top Mazda Road To Indy chassis helped Telitz to quickly adapt to SPM’s Indy car.

“The car was a little bit lively to drive, which was fine for me because the Indy Lights car is always lively, so driving the Honda IndyCar with low downforce didn’t surprise me at all,” he said. “What did surprise me was the brakes. It was my first time using carbon brakes, and the stopping power is so much greater than anything I’ve felt before. And getting used to the Firestone tires was another difference to understand.

“I was in the car to do as many laps as possible, and what I experienced was the drop-off with the Firestones that I’m told is normal, but it was different for me because the Cooper tires we use in Indy Lights don’t really change from beginning to end. I got a good feel for the Firestones, so that was cool.”

Telitz’s story in motor racing has been one of steely resolve. A long and arduous road filled with wins and disappointments have helped the 26-year-old to develop a fighting spirit. And from those trials, a sense of appreciation for new opportunities like testing for SPM has also become part of his character.

“We did a few chassis changes which made the car better for me, so that was fun, and what I really enjoyed was working with [race engineer] Leena Gade,” he added. “She’s super smart, really nice, and it would have been easy for me to be intimidated by her with all her success, but she was inviting and so easy to work with. The team was so welcoming throughout the day, and I had Hinch on the radio coaching me, giving me all kinds of advice, and I couldn’t have asked for a better situation to be a part of.” 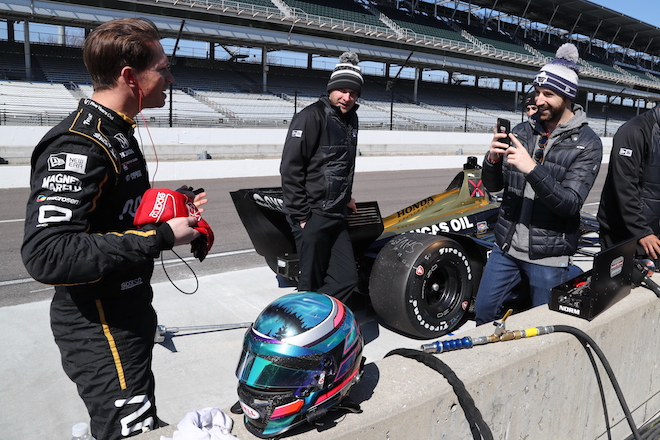 Although heading out to complete a qualifying simulation run was not part of his IndyCar debut, Telitz is confident he learned enough and showed enough speed to warrant consideration for a drive in the future.

“By the end, they let me do a run on new Firestone blacks, on full fuel, and that was awesome,” he said. “It doesn’t feel overpowering. I was a little nervous thinking about all the things I needed to remember to do, and I think if I get a chance to be in an Indy car next year, or even this year, if the opportunity opens up, I’d be ready for it and could do a good job.”