With a strong field of 104 entries set for this weekend’s Pirelli World Challenge Grand Prix of Texas at the Circuit of The Americas, there will be many questions to answer when practice rounds open Friday in the first GT and GTS SprintX doubleheader as well as the debut of the all-new TCR division.

Competitors always flock to the popular state-of-the-art 3.427-mile, 20-turn road circuit southeast of downtown Austin and this weekend’s first PWC headliner event of the 2018 campaign seems no different. In fact, the debut of the GTS SprintX category sees a robust field with 38 cars entered and a very talented driver lineup set to do battle.

All Pirelli World Challenge classes – GT/GTA/GT Cup SprintX, GTS/GTSA SprintX, TCR, TC and TCA – will be featured with the races (60-minute, two-driver in GT and GTS divisions and 40-minute, one-driver in the TC categories) being held and Saturday (March 24) and Sunday (March 25). In addition, the highly-competitive Blue Marble Cocktails Radical North America series will be in action as well as the Mazda MX-5 Cup.

GT SprintX Preview
The GT SprintX division held a wild tripleheader race weekend last September at COTA as the GT Sprint championship came down to a dramatic final event. This year, COTA opens the GT SprintX trail with Round 1 (Saturday) and Round 2 (Sunday) featuring an 18-car field set to hit the famed COTA circuit.

Another strong Porsche Pro-Pro pairing at COTA will be competing in the No. 24 Alegra Motorsports Porsche 911 GT3 R with endurance veteran Michael Christensen of Denmark and Atlanta’s Spencer Pumpelly. Pumpelly was a GT SprintX winner last year at Lime Rock Park. Another GTS SprintX race-winning driver, Daniel Morad of Canada, who won at COTA and VIRginia International Raceway in 2017, returns to COTA in the No. 2 CRP Racing/DeVilbiss Mercedes-AMG GT3 with a driver to be named.

Former GT Sprint champion Alvaro Parente of Portugal returns to PWC action after his wild incident in Round 2 in the streets of St. Petersburg when his No. 9 K-PAX Racing Bentley Continental GT3 lost its brakes on the back straightaway. Fortunately, Parente walked away for the accident but the K-PAX Racing had to go to the backup car for this weekend’s COTA GT SprintX doubleheader. Parente will team with veteran Bentley driver Andy Soucek of Spain this weekend in the Pro-Pro class.

The popular No. 26 Callaway Competition USA Corvette C7 GT3-R figures to be a contender in its first COTA appearance in the PWC Pro-Pro class with Germany’s Daniel Keilwitz, second at Round 2 at St. Pete, and former PWC regular Eric Curran of Sarasota, Fla., at the controls.

A powerful international duo of Toni Vilander of Finland and Miguel Molina of Spain could be the ones to beat at COTA with the always-strong No. 61 R. Ferri Motorsports Ferrari 488 GT3. Texas favorite Long Star Racing has entered its Mercedes-AMG GT3 with drivers to be named in the Pro-Pro division.

In the Pro-Am class, defending driving champion James Sofronas has moved to the GTS division in 2018 and the category sports a stellar lineup of pro and am drivers to battle in the first GT SprintX doubleheader this weekend.

The always-fast No. 54 Black Swan Racing Porsche 911 GT3 R returns to the Pro-Am division with Tim Pappas of Boston, Mass., and Jeroen Bleekemolen of Monte Carlo. The Black Swan team recently captured its class and was third overall in the 12 Hours of Bathurst in Australia.

Last year’s GT Cup champion, Yuki Harata of Japan, is back to PWC in the No. 55 Dream Racing Motorsport Lamborghini Huracan GT3 this time, teaming with Alessandro Bressan of Italy. Former GTA champion Martin Fuentes of Mexico City, Mex., a double winner two weeks ago at St. Pete in GTA, is a favorite in the Am-Am division this week as he partners with Caeser Bacarella of Miami, Fla., in the No. 07 Squadra Corse Garage Italia Ferrari 488 GT3.

Other Am-Am contenders at COTA are the DXDT Racing team’s David Askew of Salt Lake City, Utah, in the No. 63 Mercedes-AMG GT3 and Lawrence DeGeorge of Jupiter, Fla., in the No. 45 Lamborghini Huracan GT3.

The Blackdog Speed Shop team car to the Aschenbach/Pilgrim lineup will be 2017 GT SprintX Pro-Pro champion Michael Cooper pairing with veteran Tony Gaples in the No. 11 Camaro GT4.R.

Reigning GTA Sprint and GT SprintX Pro-Am champion Sofronas moves to the GTS ranks in 2018 and will team with Alex Welch in the No. 14 GMG Racing Audi R8 LMS with another COTA contender being the No. 13 Porsche Cayman GT4 Clubsport MR with former SprintX race winner Kyle Marcelli and Orey Fidani.

Defending GTS Sprint champion George Kurtz will couple with endurance racing star Colin Braun in the No. 04 CrowdStrike/GMG Audi R8 LMS with the duo of Mark Klenin and former SprintX race winner Max Riddle in the No. 62 KPR/Premiere Copier McLaren 570S. Former GTS race winner Andy Lee will drive the No. 8 5.11 Tactical/GMG McLaren 570S with Elias Sabo and the pair of Vinnie Allegretta and J.R. Pesek will contest in the No. 10 PF Racing Ford Mustang GT4 in the Pro-Am division. 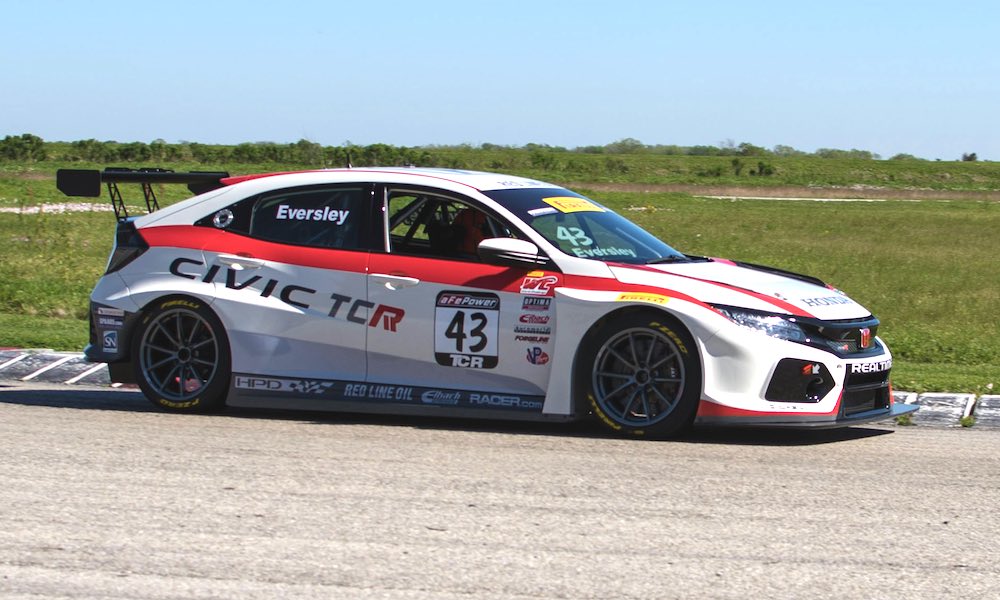 TCR Preview
The anticipation of the all-new TCR touring car division – extremely popular around world – has been growing and the class makes its Pirelli World Challenge debut this weekend at COTA with 14 entries.

Stellar teams have put together impressive driving lineups this weekend with five different auto makers – Alfa Romeo, Audi, Honda, Hyundai and Volkswagen all set to do battle on the 3.427-mile, 20-turn racing circuit southeast of Austin.

Three squads bring multiple cars to COTA including the multi-time PWC championship-winning RealTime Racing with Eversley and veteran Nick Esayian wheeling the No. 43 and No. 44 RealTime Racing Honda Civic Type-R TCR as well as FCP Euro by HRD with drivers Michael Hurczyn and Nate Vincent in the No. 71 and No. 72 Volkswagen Golf GTI TCR and two-time Indy 500 winning team of Bryan Herta Autosport debuting the new Hyundai i30 N TCR with GT race winners Mark Wilkins and Michael Lewis at the wheel of the No. 98 and No. 99 machines.

Denmark’s Martin Jensen will compete in the new Alfacr.USA Alfa Romeo Giulletta TCR as the Italian auto maker returns to PWC action in 2018.

TC and TCA ready for another exciting COTA event this weekend – TC/TCA Preview
With last year’s top point finishers – Holton, Liefooghe and Nick Wittmer – moving to other classes in 2018, the Touring Car division could prove to be wide open and produce another great year of action.

Rounding out the TC field at COTA will be veteran Jeff Ricca in the No. 78 GenRacer Genesis Coupe and Joshua Foran in the No. 93 Team HMA Honda Civic Type R.

In the TCA class at COTA, 2017 multi-race winner Kenny Murillo looks to be the favorite after scoring two COTA victories last September. Murillo return to the PWC series in the No. 24 Murillo Racing Mazda Global MX-5 Cup.

Another TCA race winner last year, Tom O’Gorman, is back in the No. 94 HPD/GRIDLIFE Honda Civic Si along with another past TCB race winner Travis Washay in the No. 30 Indian Summer Racing Volkswagen Gold GTI.