“[It was] maximum [fuel conservation]” said Derani, who made what proved to be the winning pass with one hour, 35 minutes remaining. 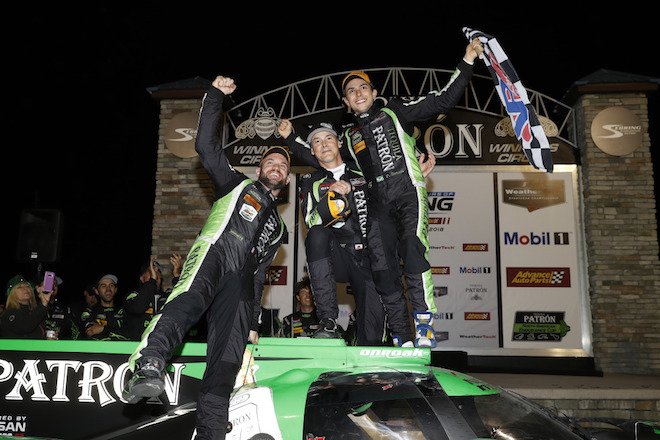 “The pit was every lap telling me the gap and I was trying to save fuel as maximum as I could. “In the end it was really, really tight. We got the low fuel on the last lap, but we finally made it, I can’t believe it.

“Thanks to this amazing team, we’ve been working so hard. This one is for my dad – he’s fighting really hard for health and I love him so much, this is for you, man.”

The winners completed 344 laps – 1,286.56 miles – on the 3.74-mile circuit. Derani nursed his fuel to the finish to give Nissan its fifth triumph in the Sebring classic, and first since Clayton Cunningham Racing took the overall victory in the 1994 event in a Nissan 300ZX.

“Of course my co-drivers did an awesome job. I don’t think there’s a scratch on the car.”

It was the second Sebring triumph in three years for ESM. Derani and van Overbeek joined co-owners Scott Sharp and Ed Brown in the winning Tequila Patron Honda Ligier JS P2 in the 2016 event.

Derani held off a determined run by the No. 55 Team Joest Mazda RT-24-P, which showed both serious pace and superior fuel mileage throughout the event. Harry Ticknell was running a competitive second when the top five Prototypes pitted with 41 minutes remaining. Tincknell had trouble restarting the car, resulting in a lost lap and a sixth-place finish for the car shared by Jonathan Bomarito and Spencer Pigot. 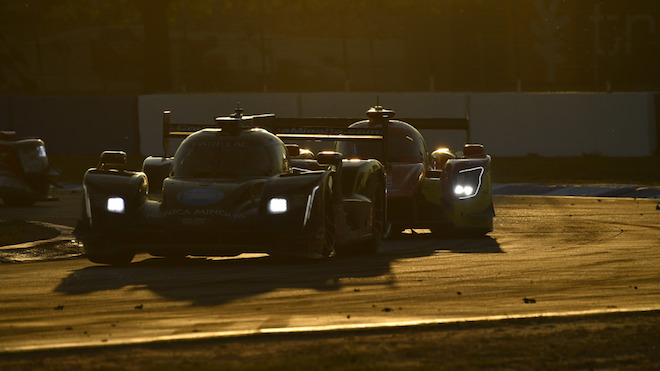 With the No. 55 falling out of contention, Renger van der Zande finished second in the No. 10 Konica Minolta Cadillac DPi-V.R co-driven by Jordan Taylor and Ryan Hunter-Reay, 12.427 seconds back, with the team battling overheating throughout the second half of the event.

“We were testing in the heat and the race finishes in the night when it is cool, so you are in survival mode during the heat of the day,” note van der Zande. “The car really comes alive at night. The engineers are superstars and they know what they are doing. They give me everything I need to perform.

“It was an eventful day. I got tapped on the rear and they made a quick fix. I have a lot of faith in my new team. They don’t give up and they stay calm when things happen. We were the best of the rest today.”

Felipe Nasr, Eric Curran and Mike Conway placed third in the No. 31 Whelen Engineering Cadillac DPi-V.R, running in contention throughout the race. Also finishing on the lead lap were the No. 54 CORE autosport ORECA 07 Gibson of Colin Braun, Jon Bennett and Romain Dumas, and the No. 32 United Autosports Ligier JSP217 Gibson of Phil Hanson, Paul DiResta and Alex Brundle, who was filling in for an ill Bruno Senna.

Both of the Mazda Team Joest RT-24-Ps led the event. The No. 77 of Tristan Nunez, Oliver Jarvis and Rene Rast lost 10 laps due to a brake issue but rallied to place eighth, turning the fastest lap of the race in the process.

The winners managed to avoid the attrition that took struck many of the contenders in Round 2 of the IMSA WeatherTech SportsCar Championship. The sister No. 2 ESM Nissan was hit on the very first turn of the race by the pole-winning No. 90 Spirit of Daytona Cadillac DPi – suffering from enough damage that it failed to complete a lap. The No. 90, driven by Tristan Vautier, also had a massive shunt during the final two hours.

“It started from the beginning of the out lap – I flat-spotted a tire because I was too impatient trying to change a switch on the car,” related Vautier. “When I got to Turn 17, I locked up a bit. I didn’t feel as though I was as wide as I was, but when I realized my left-side tires were in the marbles, I tried to get on the gas. But once you’re in the marbles, it’s like ice, and the wall came to me pretty quickly.”

The Daytona-winning No. 5 Mustang Sampling Cadillac DPi-V.R of Joao Barbosa, Filipe Albuquerque and Christian Fittipaldi lost 20 laps to replace broken steering components following an incident near the pit entrance. That resulted in a 10th-place finish, while both Team Penske Acura ARX-05s were struck with mechanical DNFs while running in contention. 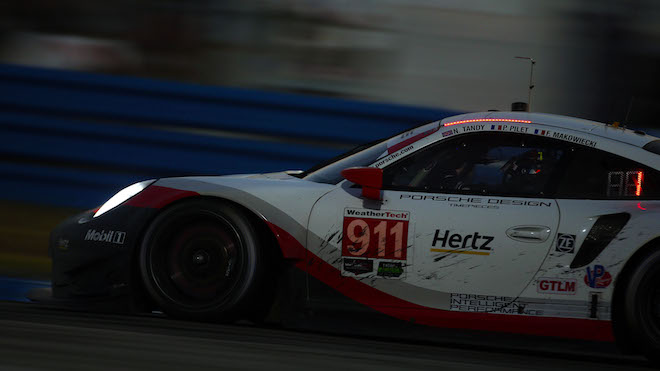 In GTLM, Nick Tandy stretched his advantage on the final round of pit stops to break open a tight class battle and cruise to a 6.230-second victory in the No. 911 Porsche GT Team 911 RSR co-driven by Patrick Pilet and Frederic Makowiecki.

“I feel awesome!” Tandy said. “What a race! That was super on the limit in the end, fighting with the BMW. It’s been a really good weekend for the team.”

The No. 62 Risi Competizione Ferrari 488 GTE driven by James Calado, Toni Vilander and Alessandro Pier Guidi ran near the front of the class throughout the event, eventually finishing sixth and the last car on the lead lap. 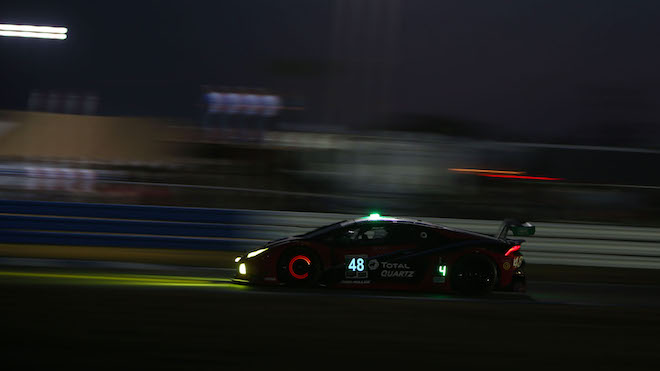 “The car was great in the end,” Sellers said. “For the first time, I’m at a loss for words. This is the 20th anniversary of the first time I came here with my dad, and I remember him saying it would be amazing if I could someday do this race.”

“Glad to be on the top step,” Snow said. “This is huge. After finishing Daytona in third place, to come here and get a first place, we couldn’t get off to a better start.”

Alessandro Balzan, Cooper MacNeil – who spent time in the hospital Friday after an allergic reaction to peanuts – and Gunnar Jeannette finished second in the No. 63 Scuderia Corsa Ferrari 488 GT3, 8.169 seconds behind, followed by the defending class-winning No. 33 Riley Motorsports Mercedes-AMG of Ben Keating, Jeroen Bleekemolen and Luca Stolz, and Christopher Mies, Sheldon van der Linde and Alessio Clemente Picariello in the No. 29 Montaplast by Land Motorsport Audi R8 LMS GT3.

“I wanted it for WeatherTech and Scuderia Corsa,” Balzan said. “We put our heads down after Daytona, and it was really fun. We had a great battle out there. It was a team effort.”

Michael Shank Racing was denied a storybook finish for its No. 93 Curb Records Acura NSX GT3 driven by Lawson Aschenbach, Mario Farnbacher and Justin Marks. The car was badly damaged in an incident during Thursday practice. Shank nearly withdrew the entry, but the team frantically worked to have it repaired in time for Saturday morning warm-up. After starting last on the 43-car grid, the team led the race and ran in contention throughout the event, eventually finishing seventh.

Team GT3 had a strong showing by both of its Lexus RCF GT3s, although double trouble struck the team midway through the event while its cars were both in the top three. The No. 15 of Jack Hawksworth, David Heinemeier Hansson and Sean Rayhall was assessed a penalty for an infraction in the pits. Moments later, the sister No. 14 of Dominik Baumann, Kyle Marcelli and Philipp Frommenwiler struck a sponsor sign during an off-course excursion, damaging the hood badly enough to send the car to the paddock for repairs. The No. 15 entry worked its way back to finish fifth.

Two cars were eliminated in the opening 10 minutes. Olivier Pla started on the outside pole in the No. 2 Tequila Patron ESM Nissan Onroak DPi, but slid wide in the first turn while fighting for the lead. His car promptly was retired with transmission trouble without completing a lap.

Twenty minutes later, Frank Montecalvo’s No. 64 Scuderia Corsa Ferrari 488 GT3 was flipped on its roof after contact in Turn 17 with Sebastian Saavedra in the No. 52 AFS/PR1 Mathiassen Motorsports Ligier JSP217. Montecalvo was unhurt after coming to a stop on his roof, but the car sustained terminal damage.

It was a wild first hour of the #Sebring12 that included this wreck between @sebsaavedra & @FMontecalvo. Montecalvo walked away. pic.twitter.com/Uf0o9u0Q3w

After the early excitement, the race settled down for three hours and 15 minutes of green-flag racing before the second caution waved when a spectator pop-up tent blew onto the track in Turn 10. Cautions bred cautions, with the race eventually slowed 11 times under the yellow.