A tweet Saturday morning from an ABC affiliate in Macon, Georgia revealed that 2018 will be ABC’s swansong covering IndyCar racing and the Indianapolis 500, but Hulman & Company president Mark Miles told RACER.com that somebody jumped the gun.

“It’s a little premature,” said Miles. “But we hope to have something to announce before long.” 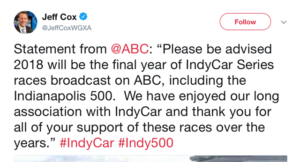 That tweet from Jeff Cox of WGKA (pictured above) has since been taken down.
Representatives from both networks had “no comment” for RACER.

NBC and ABC have been bidding for the rights to televise all the races beginning in 2019 – with both offering more broadcast network coverage. Currently, ABC airs five races on network and the other 12 races and Carb Day at Indianapolis are carried on NBCSN. Reportedly, ABC had offered 10 races on network and NBC as many as eight for next season.

But with the addition of NASCAR two years ago, NBC and NBCSN has ramped up its motorsports coverage, so this could be good news for IndyCar fans since it could free up more time for the IndyCar Series.