Performance Tech Motorsports is looking to improve on last year’s fifth-place finish in the Mobil 1 Twelve Hours of Sebring. That’s in fifth-place overall, as James French, Kyle Masson and Pato O’Ward won the IMSA Prototype Challenge class at Sebring in the final year of PC. For 2018, the Florida-based team has upgraded to the lead Prototype category, with the three drivers returning to share the No. 38 ORECA 07-Gibson. They’re finding it a big step.

“Moving up from the PC class to this car is a big jump,” Masson admitted. “The 24-hour race at Daytona was my first time in this car – I had no previous testing experience in a Prototype. It’s really good to have a teammate like Pato. He’s solid, and we can really learn from him. But it’s a huge jump for the program.”

Thursday’s opening practice was an eye-opener for the team.

“We missed the test here, because we were waiting for parts to arrive to repair damage from the Rolex 24,” French said. “We had a lot of catching up to do. But it’s getting better as time goes on. We’re learning more in every session.”

The improvement is showing. O’Ward was third fastest in Friday morning’s final practice.

“I think we finally got a handle on the car,” said team owner Brent O’Neil. “Pato did a good job. The ORECA is a good chassis. We took a different path setting up the car, but we might have made a little mistake. So we were here last night until 1 a.m. working on it. Nothing major, but we went through a lot of little things to make the car better for the guys. Now I think we’re in good shape. It was a long night and a short sleep, but the drivers are really glad we did it. Moving to Prototype is a big step for us, but heck, we’re racers.”

The team made its Prototype debut in January’s Rolex 24, placing eighth overall, 12 laps down.

“We had a little damage from where we were hit in the left-front by a GTD car,” O’Neil said. “That knocked the dive plane off.” 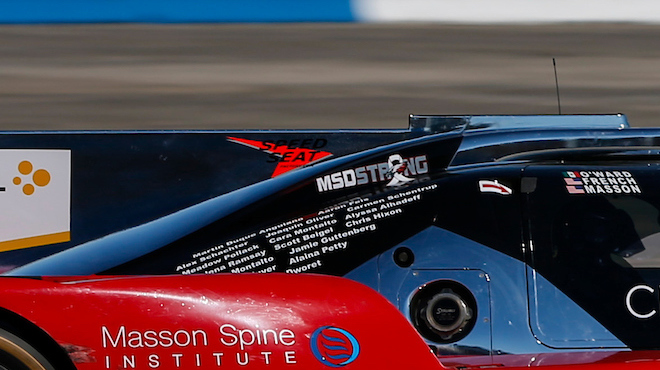 The team is dedicating this event to the victims of the recent tragic shooting at Marjory Stoneham Douglas High School in Parkland, Fla. Danielle O’Neil – the daughter of the car owner and a regular at the races – is a junior at the school, and spent a harrowing three hours hiding in a closet. This weekend, the No. 38 ORECA is carrying the names of the 17 victims from the tragedy, while many of the teams are running with “MSD Strong” decals.