Kevin Harvick is a grade A troll. A master on the microphone. No driver pulls off having an attitude better than he does. But he needs to stop feeding the keyboard warriors.

The Stewart-Haas Racing driver was determined to get his point across last weekend at ISM Raceway, and boy did he succeed. In his first media availability of the weekend, Harvick laughed off an opening softball question from the moderator, knowing what those in the room really wanted to hear about.

Following an L1-level penalty after winning in Las Vegas, Harvick didn’t disappoint as he ripped into NASCAR officiating and repeatedly brought up social media. Online outcry led to his penalty, Harvick implied. Policing the sport through pictures and listening to those cries is a slippery slope, he said.

Having a problem with the penalty and feeling it was unnecessary is one thing. And Harvick turning his nose up at NASCAR after winning once again by patting the rear window during his celebration made for good television.

“I’ve been pissed, is what I’ve been,” said Harvick in victory lane. “I’ve been mad as all get-out because this team does a great job, this organization does a great job, and we’ve got fast race cars. To take that away from those guys just really pissed me off last week.

“To come to a racetrack that is so good for us is a lot of fun, and everyone was just determined this week. We just wanted to go stomp them. We didn’t stomp them, but we won. That’s really all that matters. Just proud of this team. It put a fire in our belly.”

Later he added, with a classic Harvick smile, “And all you haters… I see you.” 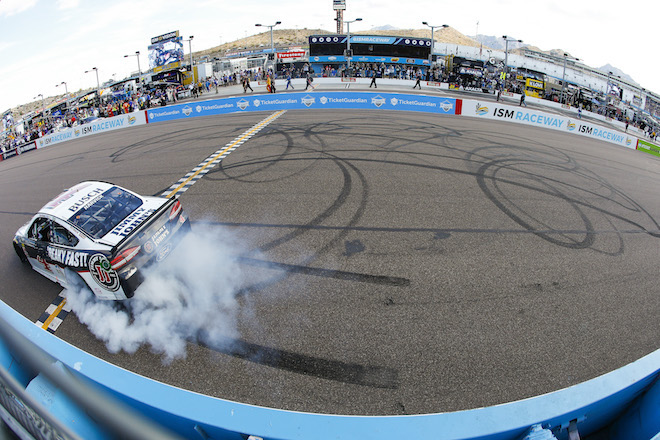 This is not new. Again, Harvick never backs down from a fight, which early in his career was how he earned his reputation. Whether it was confronting a veteran like Ricky Rudd (2003 at Richmond), getting physical with Carl Edwards (2008 at Charlotte), or instigating the Brad Keselowski and Jeff Gordon melee (2014, Texas), you can always count on him for a good quote and a headline.

Harvick has been parked by NASCAR for aggressive driving (Martinsville 2002), and even leaped over a car to get to another driver. For that one, I highly suggest searching for the 2002 Busch Series race at Bristol.

But I never thought I would see the day when Harvick gave credit to social media for having an impact on the sport. That idea is “adorable,” as Verizon IndyCar Series driver James Hinchcliffe would say.

If you believe NASCAR doesn’t have its own resources and technology to keep track of what its teams are doing, and that it would rely on social media for policing, well, I believe there’s a saying about ocean-front property in Arizona.

Granted, the Harvick penalty marked the second time a driver was penalized after a story blew up on social media. Reddit users were made to feel good last fall following outcry about Chase Elliott’s team removing tape from the rear spoiler after the opening race of the playoffs in Chicago.

However, social media is nothing more than social networking. It’s a place to engage like-minded people. It does not give users the right to police a sporting event any more than it would if they were sitting in a grandstand. Fans certainly have the right to an opinion about rules and penalties, and arguing about such decisions is practically a tradition. Think of it like yelling at an NFL referee over calls or non-calls, or arguing the strike zone in a baseball game.

At the end of the day while fans can post pictures on social media and red flag showing what they view to be potential infractions, it shouldn’t be expected that race control will actually base a decision off of it.

I do hope Harvick never changes, that he keeps that edge about him. Just take it from a writer who quickly learned what it means to not engage the crazy. Maybe I’ll tell Harvick that via a tweet – with a Photoshopped banner on his car’s rear window.