Alexander Rossi went for it, Robert Wickens got punted out of the lead and Sebastian Bourdais scored another unlikely victory at St. Pete in one of the craziest IndyCar season openers in recent memory Sunday afternoon.

Wickens, the rookie pole-sitter who led 69 of the 110 laps and drove flawlessly for Schmidt Peterson Motorsports, was out in front with two laps to go on the restart when Rossi tried to dive under him going into Turn 1.

The 2016 Indianapolis 500 winner slid into Wickens and spun him while fighting for control, but Bourdais and Graham Rahal both got by him before the full-course yellow came on to end the 110-lap race.

“I need to see a video to know [what happened] for sure. I didn’t get the best restart in the world but that didn’t matter,” Wickens said. “I braked late into T1, I defended a bit, I gave him space on the inside and he couldn’t keep it and I guess he just slid into me.”

“It would have been a fairytale to finish that one out but I guess it wasn’t to be. Just happy that I was competitive this weekend.”

An unreal turn of events on this restart with to go! Watch NOW on ABC!#FirestoneGP | #INDYCAR

So Bourdais, who came from last to first here a year ago with some nifty strategy and help from timely cautions, repeated his performance by using pace and seven full-course yellows to come from 14th to first.

“This one is emotional because we had overcome a few bumps and rolls and a bald tire and a few broken bones,” said the 39-year-old veteran from France who was badly injured last May during qualifying at Indianapolis.

“I couldn’t be happier for the team, it’s a tiny group but they work their tails off. I was heartbroken for Robert but for us … I can’t quite put it into words.”

ICYMI: This was the contact in Turn 1 that opened the door for @BourdaisOnTrack to take P1 at the @GPSTPETE!#FirestoneGP | #INDYCAR

Driving for Dale Coyne, Bourdais led a Honda rout as Rahal went from 24th to second in his RLL Honda, Rossi wound up third in his Andretti Honda, James Hinchcliffe was fourth in the other SPM Honda and Ryan Hunter-Reay placed fifth in the another Andretti Honda.

The race began with Will Power trying to wrestle away the lead from Wickens on the outside, only to see the two-time St. Pete winner spin as he put the power down in Turn 2.

On the restart, rookie Jordan King got underneath Wickens to take the lead but that was short-lived as he went wide on Lap 7 and Wickens reclaimed the top spot. The Canadian who was trying to become the first driver to win his debut since Buzz Calkins in 1996 at Orlando, maintained the lead for 24 of the final 25 laps and repeatedly held off Rossi’s charge.

The new aero kit proved to be a handful all afternoon for champions and newcomers alike. Scott Dixon plowed into Takuma Sato and Rahal punted Spencer Pigot – both in Turn 1 where Rossi contacted Wickens – while rookies Matheus Leist and Jack Harvey made heavy contact with the wall in separate incidents. 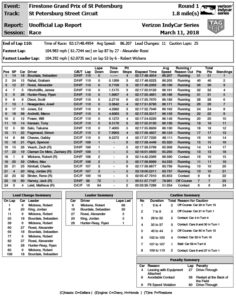