Five-time Pirelli World Challenge class champion Lawson Aschenbach left little doubt Saturday that he’ll be the top contender again in the GTS class with an impressive victory in the streets of St. Petersburg in the GTS Round 1 50-minute sprint event.

Aschenbach, driving the No. 1 Blackdog Speed Shop Chevrolet Camaro GT4.R sports car, made a dramatic lap one move over pole winner Gabriele Piana of Italy for the lead and scored a 0.547-second victory in the 33-lap race at the 14-turn, 1.8-mile temporary course near the St. Petersburg harbor.

“This is one of my favorite races of the year – the opening of the Pirelli World Challenge,” said Aschenbach. “Back in 2006, it was my first time here and I scored my first pro win so I have fond memories of this place. It’s a great track, there’s an ability to pass people. We saw a lot of that today. There was good action for the fans.

“The Camaro is a great car – it’s quite quick on a short run but over time you seem to have a lot of tire fade and then you have a harder time getting around some of the quicker, more nimble cars.

“If I could make that move early and make that lead, I was hoping I could hang on to it at the end but Gabriele (Piana) kept me honest and he did a great job in the Porsche. Sports car racing is the purest form of racing in the world, because we’re racing the cars you can buy on the street. It really brings home the point of winning on Sunday, buying on Monday. This is cost-effective racing and that’s what we need now.”

Piana was sensational in his PWC debut with the No. 21 Muehlner Motorsports America Porsche Cayman GT4 Clubsport MR, recording a new qualifying track record Saturday morning and pressuring Aschenbach throughout the 50-minute event. But Piana had to settle for second Saturday.

“I was surprised by Lawson’s pace today,” said Piana. “I was happy with my start, but I was 90% sure that I wasn’t going to be first after the first corner because the car is slower on the long straightaway. The Camaro is very powerful; but the car doesn’t drive itself, and Lawson took the chance when he had it, so I tip my hat to him. Having said that, I really tried everything. I had a lot of fun driving and I was really pushing hard.” 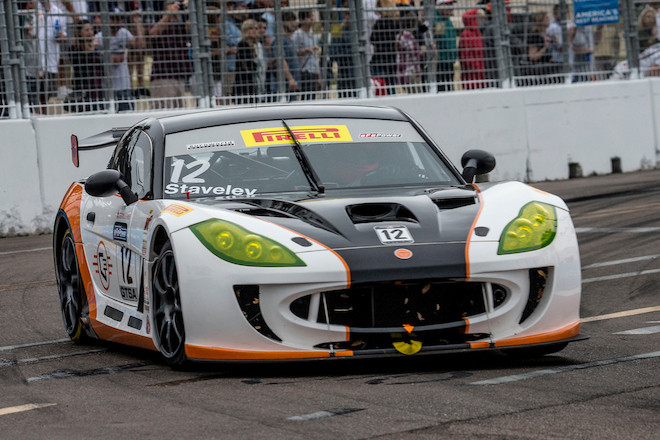 Third overall and first in the GTSA division was Drew Staveley in the No. 12 Ian Lacy Racing Ginetta G55 followed by local favorite Jason Bell in the No. 2 M1 GT Audi R8 LMS GT4 and 2017 GTA and SprintX Pro-Am champion James Sofronas in the No. 14 GMG Racing Audi R8 LMS GT4.

“This is a big year for us,” said Staveley. “We got three new Ginettas over the winter. Today the car went really well. On the racetrack, it’s all about the starts. On the first start, I wasn’t really sure what happened, I just kind of fell back. This is my first street course. It’s a really fun track. It’s technical. There are bumps and all kinds of consequences that I think a good racetrack needs so I felt right at home there.”