Ryan Hunter-Reay and James Hinchcliffe admitted to being surprised by the scale of adjustment demanded by IndyCar’s new aerokits during the bodywork’s race weekend debut at St Petersburg on Friday, despite the pair finishing the day with the two fastest times.

“We come out here and we’re used to years past, knowing exactly how hard we have to push it,” said Hunter-Reay, who topped the charts at 1m00.8295s in his No.28 Andretti Autosport car.

“In the past with more downforce, we actually had to go a little bit beyond our comfort level to get the lap time out of the car because there was so much downforce on it. That was the most awkward thing about today, trying to rein that back a little bit, try not to ask so much of the thing.

“That’s where it’s difficult. It’s just sliding around. It’s overall lack of grip. I remember after my first two outings coming back trying to get feedback. It’s not really doing one thing wrong or another thing wrong, it’s all-over-the-place light.

“I think the biggest issue is going to be tire degradation in the race just because you’re sliding around so much, asking so much of the tire. It’s good though. It’s a new challenge. Got everybody on their toes. We’ll see who makes the most of it in the shortest amount of time.” 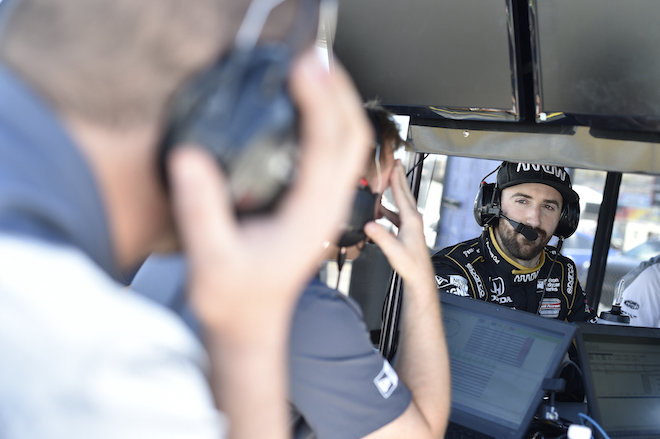 Hinchcliffe, who ended the afternoon 0.04s shy of Hunter-Reay’s time in the No.5 Schmidt entry, said readjusting to the heavy braking zones was an area that had caught his attention.

“I almost kind of was hoping we could talk to the track about adding some sign boards down in turn four because there’s only three, two, one,” he said. “We used to brake after three, now a good chunk before it. It’s hard to judge. That’s how much it’s changed. We literally need new brake markers because we’re going so much faster and have so much less downforce.

Drivers will have one more opportunity to adjust to the new car’s characteristics in the third practice session tomorrow morning before heading out to qualify at 2:20pm ET.