Cooper Tire and Mazda continue their efforts to assist young drivers in developing their brand and message with platforms that include the Mazda Road to Indy Presented by Cooper Tires Hashtag Program, which rewards drivers and teams for utilizing the #MRTI and #TeamCooperTire hashtags on Twitter and Instagram.

The social media program originated in 2014 as an initiative by Cooper Tire designed to encourage drivers and teams to give their fans an inside look at the life of an up-and-coming race car driver, bringing out the personalities of competitors who spend so much of their sporting lives behind the helmet. The program helps broaden each driver’s reach, giving them (and their sponsors and supporters) exponentially more views and opportunities for engagement, as well as the ability to track posts.

Fans of each series can follow their favorite drivers and teams’ content by searching the hashtags #MRTI and #TeamCooperTire on Twitter and Instagram – including Instagram timelines. Drivers are entered in monthly drawings for prizes that include IndyCar Radio and Road to Indy TV interviews, Verizon IndyCar Series team pit visits, Cooper Tire racing or street tires and a Mazda race gear credit.

This season’s program continues an additional element from series partner Hi-Tide Boat Lifts, in support of its “Kids on Track” program. The 501(c)(3) program brings youngsters from local children’s organizations such as Big Brothers and Big Sisters for a VIP day at the races that includes meet-and-greet tours with drivers and teams. Drivers will be posting welcome messages and photos to the youngsters on their own social media channels throughout the season.

“Being active on social media allows MRTI drivers and teams to connect with race fans by giving them a behind-the-scenes look at what racing is all about. And, by uniting their posts through the use of #TeamCooperTire and #MRTI, the reach of this content is significantly amplified,” said Chris Pantani, director of motorsports at Cooper Tire. “The Mazda Road to Indy Presented by Cooper Tires Hashtag Program offers tremendous opportunity to increase both engagement and fan base for the sport and the athletes involved, and I’m thrilled to see so many MRTI drivers and teams excited about the program as it moves into its fifth year.”

“Our partners at Cooper Tire and Mazda have really developed the MRTI Hashtag Program over the past four years,” said Dan Andersen, owner and CEO of Andersen Promotions. “The contest periods feature fun challenges for our drivers and teams, and rewards them for their efforts on social media. Providing attractive prizes for the teams and drivers – including hospitality tickets they can give away to fans – strengthens and expands their fan base. It’s a ‘win’ for everyone, and I have to thank Cooper and Mazda for continuing to think outside the box.”

“The Mazda Road to Indy is obviously focused on developing the drivers in the car,” said Kyle Kimball, manager of operations for Mazda Motorsports. “But everyone in today’s motorsports industry knows how much the sport has changed, and in order to be successful a driver has to be just as good outside the car as he or she is on track. Our goal is to help these drivers develop themselves as people and as racers, and to develop their brand, and we know through the evolution of this sport that developing your brand is almost as important as developing your talent inside the car. We hope that this hashtag program is looked upon by these drivers as a way to build their brand and their experience in networking and building relationships with industry professionals, media and public relations representatives. The drivers who can extract the most from those resources are usually the ones who are successful climbing the MRTI ladder. We tell the drivers at the outset that if there is anything we can do to help them build their brand in conjunction with this program that we are here whenever they need us.”

“I am very proud to race in a series like the Mazda Road to Indy,” said Pro Mazda driver Parker Thompson. “Cooper Tire and Mazda are such great partners for the series, and #TeamCooperTire has gone above and beyond when it comes to providing for the drivers. Not only do they provide prize funding, they developed the social media hashtag program. At the end of the day, drivers should be updating their fans on race weekends but the fact that #TeamCoooperTire has been so generous with incentives means there should be no excuse not to be posting on their social media platforms. I can’t wait to compete with drivers on the track and on social media this year thanks to Cooper Tire.” 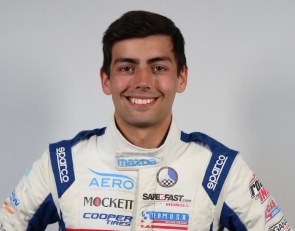