The choice to forego Dallara’s engineering support package had a surprising impact on Action Express Racing’s season in 2017.

With the new Dallara-built Cadillac DPi-V.R made available to AXR for its two-car IMSA campaign, and a single entry apportioned to Wayne Taylor Racing, the 6.2-liter prototypes ran roughshod over the WeatherTech SportsCar Championship field for seven consecutive races.

The tally, however, was less than kind for the defending champs at AXR as its inter-brand rival took control from the outset.

WTR captured big wins at the Rolex 24 at Daytona, 12 hours of Sebring, Long Beach, COTA and Detroit – the first half of the 10-race schedule – before AXR finally found Victory Lane. Beyond driving talent, and even engineering talent, one of the key contributors to WTR’s rampaging start to 2017 came as a result of opting in for Dallara’s engineering support.

The added layers of simulation data, chassis and aero optimization suggestions, and overall doubling or tripling of WTR’s internal engineering resources gave the team large advantage that proved to be insurmountable.

By midseason, AXR race engineer Iain Watt was able to reel in WTR in the Cadillac setup wars. Back-to-back wins at Watkins Glen and Mosport ended WTR’s streak, and with a series of strong performances to close the year, AXR took second and third in the championship. In light of the comparatively small engineering staff at AXR and the sizable opposition they faced against WTR and Dallara, the in-season turnaround was impressive.

And given more time over the offseason, Watt and AXR returned to Daytona and put on a mighty display on the way to a comfortable win with Joao Barbosa, Christian Fittipaldi and Filipe Albuquerque in the No. 5 DPi-V.R. Whatever gains WTR found with Dallara appear to be a thing of the past as the Cadillac teams – recently joined by Spirit of Daytona – prepare to resume the fight on March 17 at Sebring. 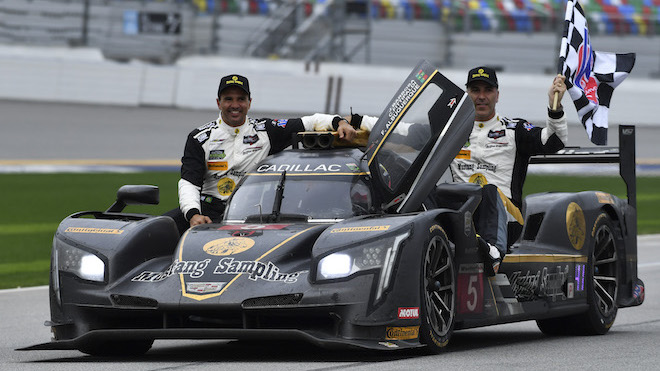 “I would say it’s accurate about them getting a jump on us last year with [Dallara’s] support,” Fittipaldi told RACER. “Now it’s hard for me to quantify how much of that really makes an influence on the track, but for sure, it did a little bit. It’s hard for you to pinpoint exactly.

As AXR prepares for the second race of the IMSA season, Barbosa points to last year’s uncharacteristic opening stretch as an ongoing form of motivation for the team.

“Definitely we don’t want the same situation as last year to repeat,” he said. “Last year it was a completely new car for everybody, we got the car really late, we were not able to test as much and the way we would like to, and I think that made some of the difference.

“Then you go into the second year with the Cadillac, and I think there was a clear picture for everybody here on what needed to happen. The team understood exactly what the weak points of the car were. We made them stronger, better, and I think it showed in Daytona that we were prepared, no matter what, that we were ready for a great fight with all the new teams and cars showing up. So, we prepared during the winter pretty well to face the first race of the year and keeping it going is the main thing we are trying to do.”

Final Balance of Performance tables will be out soon for Sebring. IMSA tested a number of balancing options for its Prototype class during the recent open test at the Florida road course, and based on what he experienced during the Rolex 24, Barbosa hopes the Cadillacs aren’t hit with performance penalties for the 12-hour contest.

“I had great fights with the Penske [Acura DPi] cars, with the ESM [Nissan DPi] cars in the race and, honestly, I don’t think we were speed-wise the strongest ones. That’s for sure,” he said. “We won the race for Action Express, but this year was a little bit different because usually there’s a few cars fighting all the way until the checkered flag, and this year everybody had problems. We were one of the lucky ones, that way.

“They had to manage their cars, so it was kind of a weird race, but I don’t think it’s fair to say, ‘OK, you guys finished first and second with the Cadillac, now, we’re going to do BoP because you guys won.’ If you have a rough look at the numbers, obviously, we had great pace, but also we had a great team strategy, great team calls, and ran a great race. We had an unscratched car, no problems at all, and we ran clean. These things aren’t BoP.”