Christina Nielsen’s life as a driving champion is rather extraordinary. As a two-time IMSA WeatherTech SportsCar Championship GTD title winner, the young Dane has become one of the series’ most popular names, and with the ability to use her increased awareness, introducing school-age girls and young women to the sport has become a new passion.

The Wright Motorsports Porsche driver, back from a busy Wednesday spent at the Detroit International Academy for Young Women in the Motor City event, was moved by the smarts and strength found within the diverse students she met.

“They were so sweet and so intelligent,” she told RACER. “There was a 10-year-old girl who asked me how I balance my career against my personal life, and I thought, ‘Hold on, aren’t you a little young to be thinking about things like this?’

“I always say that it’s the people that make the difference, and very much in a race team, and I got to share with them the different roles in our sport. I don’t go to these events trying to get more girls to come into racing, but I do like to expose young girls to what we do so if they like it, they see there are women already here.”

Paired with a group of robotics enthusiasts, Nielsen delivered a message of empowerment through self-determination. 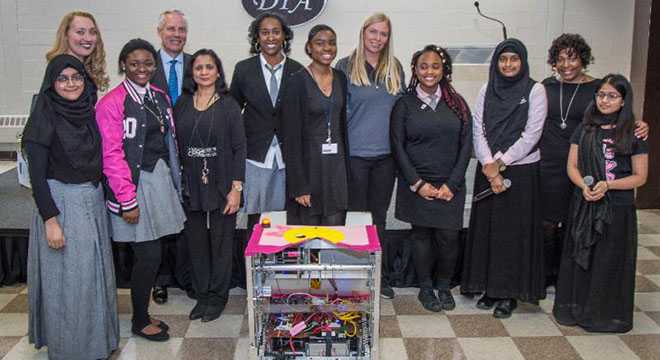 “With yesterday’s panel, I wanted to create a forum where they were comfortable sharing their experiences with me,” she said. “I asked them to raise their hand if a boy or a man has every told them they couldn’t do something because they were girls, and several stood up and told us their stories. We talked about the mentality they were facing, and their reaction to it – how they handled the situation, and how they can not let those people influence them. I also told them they’ll never be successful on their own. They’ll only be successful with other people, and I don’t let negative people work around me. I told them to surround themselves with people who believe in them and want to work with them to grow.”

Nielsen’s new friends will get a chance to see her team in action at June’s Detroit Grand Prix, where the WeatherTech Championship shares the bill with IndyCar at Belle Isle. The sharing of more life lessons can be expected.

“Comerica Bank sponsored the event, and all of the girls will come out to the Detroit race on Friday and meet our team,” she added. “And I told them they’ll see two women working in our team; me as a driver, and our communications person, and the rest are men, the mechanics and engineers, and I don’t want you to be discouraged by that. You can obtain these jobs when you are older if you want them.

“Even if you don’t see a woman role model in the field that interests you, don’t let that stop you. They should find energy and motivation within themselves to move forward. And they need to know that even at their young age, they are role models to younger sisters, younger brothers in their family, and this is a cycle that continues.”

“What I also liked as an example was that the girls were sitting here because Monica at Comerica made it possible, and they can become racecar drivers, engineers, managers, mechanics; whatever they choose,” she said. “But they can also be like Monica and choose a career in international business and finance. Someone from this field went to Monica’s school to talk about it, and look where she is now. It’s very rewarding to go and speak and meet these girls who are so smart and can do anything with their future. Getting the chance to do these events is a privilege for me.”