Harvick: 'We need to get back to where everybody can go drink a beer together and have a good time'

Harvick: 'We need to get back to where everybody can go drink a beer together and have a good time'

He may be a champion in two of NASCAR’s top series. He might also have over 600 Monster Energy NASCAR Cup Series starts with 38 career wins. And he might be at the beginning of his 18th full season at the sport’s highest level. But Kevin Harvick still loves the sport’s challenges, and feels the need to give something back.

“I think you have to find something on a weekly basis to keep yourself enthused,” Harvick said after his win last weekend at Atlanta Motor Speedway. “For me, right now the sport is what enthuses me and is very intriguing to me, because there’s a lot of things that need some help and guidance.”

Younger drivers, for example. Harvick knows there is so much for a driver to learn, and he’s even discussed with fellow Cup champion and veteran Jimmie Johnson that there needs to be someone to explain how things work, show them the ropes of racing in the NASCAR big leagues.

“That to me is fun,” said Harvick. “You want to go beat them on the racetrack still; it’s not anything about that. But we need to get back to where everybody can go drink a beer together and have a good time. I walk in the garage and we try to do as many things as we can for the officials and people in NASCAR, just because it feels like everybody has kind of forgotten exactly how much fun this is and how lucky we are to walk into this garage on a weekly basis or to sit in that car on a weekly basis and drive racecars around in circles.” 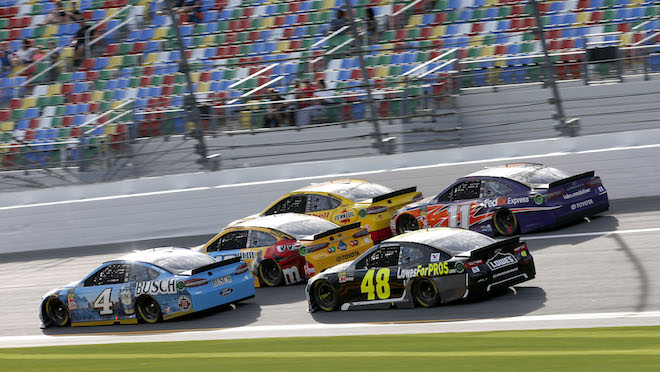 Harvick, Johnson as well as Ryan Newman and Jamie McMurray are some of the oldest drivers in the Cup Series garage at 40 or over. Harvick and Johnson are both 42 and have been competing in the Cup Series since 2001 and 2002, respectively.

Harvick has faced plenty of challenges since being thrown into the fire inheriting Dale Earnhardt Sr.’s ride and team. In recent years there has been his move to Stewart-Haas Racing (2014) and the organization’s switch to Ford (2017).

“For me, I’ve just got a much better appreciation of how cool it is to sit in that racecar and really enjoy the things that I do,” Harvick continued. “I want to spread that to the rest of them, because it’s not all sponsors and politics and business and all the things that you think it all is right now.

“It’s fun. Everything we did to get to this point is fun, and I want to make sure that everybody hears me talk about how fun this is and realize – and maybe spark some interest in somebody in the garage or working on the car or driving a car – that we’re lucky to do what we do, so you’d better enjoy it because it might not be here tomorrow.”