Lewis Hamilton was quickest on the final day of the first test at the Circuit de Barcelona-Catalunya as McLaren finally showed both pace and reliability.

Sharing the W09 with teammate Valtteri Bottas – who drove during the morning session – Hamilton was 0.521s clear of the rest of the field as warmer conditions allowed significant running throughout the afternoon. The defending champion’s time of 1m19.333s on medium tires was comfortably the fastest time of the week, while Hamilton also managed 69 laps.

But it was the driver in second place on the timing screens who stood out as Stoffel Vandoorne ensured McLaren ended the week with the second-fastest time of the day – and third best overall of the week. The Belgian posted a 1m19.854s on the hypersofts and also managed 110 laps as he spent the majority of the day in the car, handing over to Fernando Alonso just after 3 p.m. local time.

McLaren had planned to do its driver switch earlier in the day but despite there being no rain throughout the session, the track took longer to dry after Wednesday’s snow and overnight showers. All of the morning running took place on wet or intermediate tires, catching out Marcus Ericsson as he brought out the first red flag for a spin at Turn 2.

The track was finally good enough for slick tires after four hours of uninterrupted running – with the lunch break cancelled to allow teams maximum track time after this week’s weather – and times dropped in the afternoon session. As a result, four of the bottom five drivers on the timing screens – Nico Hulkenberg, Bottas, Ericsson and Sergey Sirotkin – all drove in the morning.

Behind Hamilton and Vandoorne it was Sebastian Vettel who was third quickest, just over 0.9s off Hamilton and completing 120 laps in the SF71H. There was less than 0.1s between Vettel and Kevin Magnussen in fourth place, as Haas enjoyed a solid day of running and was just four laps shy of the 100 mark.

Alonso was fifth after taking over from Vandoorne, and his 51 laps gave McLaren the highest total for the day with 161. It was a much-needed recovery for the team despite Wednesday’s weather, with reliability issues on Monday and Tuesday seeing it finish with a total of 260 laps for the week.

Talk of a good recovery does not relate to Red Bull, however, with Max Verstappen registering the lowest tally of 35 laps on the final day. Having sat out the majority of the wet conditions by choice – completing just five laps during the morning – Red Bull had reached 32 before it spent a long spell in the garage. Upon Verstappen’s return, he duly spun off at at Turn 12, telling RACER he was unsure if it was driver error or a car issue, although the lack of a return to the track suggests it was the latter.

Red Bull can take some solace from its junior team Toro Rosso, as the Honda-powered STR13 managed 147 laps on the final day to give the team the highest mileage of the week. Thursday’s total was the most number of laps completed by Honda in a single day of testing since returning to F1 in 2015 – surpassing its previous best of 121 with McLaren – and Toro Rosso ended with a total of 324 laps over the four days. 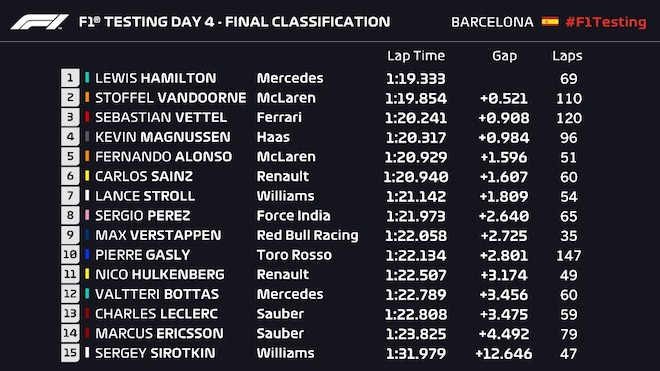