Daniel Ricciardo has described the RB14 as being “potentially” a title-winning car after topping the times on the opening day of pre-season testing.

On a rain-interrupted first day at the Circuit de Barcelona-Catalunya, Ricciardo set the pace in the morning on medium tires, edging out Valtteri Bottas by 0.170s. The Australian was also the only driver to complete more than 100 laps, and when asked if the 2018 Red Bull feels like a championship winner, Ricciardo replied: “Potentially yeah, but it is very early.

“Today was positive but the reality is that we are never going to drive in these conditions. I am a bit frustrated as well because although we had a good day and I am happy for reliability, when we come here in May it is a completely different track. So part of me wishes we were somewhere else like Bahrain, where you can get some real testing in real temperatures.

“I know it is convenient for the teams here, it is close in Europe, but we learned a lot about reliability today but other than that…sure the car is not a dog and feels pretty good. But it is going to be completely different when we race. So I don’t want to be negative but it is a bit frustrating when you can’t do too much.” 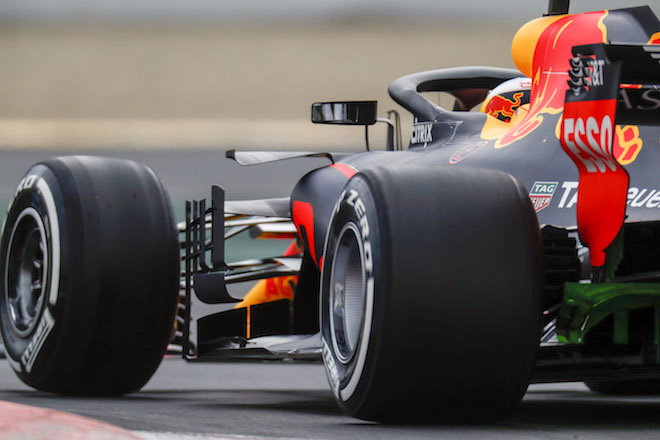 Despite his warning about the performance levels in cold weather, Ricciardo was at least positive about the reliability shown by the new car.

“It was good. The performance – it was nice to see yourself at the top of the times, but it is always hard to get a gauge on that, especially day one. Reliability – I don’t think we’ve ever done 100 laps on day one. Not since I’ve been with the team. That is positive. We did long runs as well. One run was 35 laps or something. So that is positive. And the pace does not seem to be too bad, so a good day.

“But with the temperatures you can only learn so much. This afternoon we figured out reliability things but performance you really can’t learn anything when it is two degrees [Centigrade, 35 degrees Fahrenheit] track temperature.”

Max Verstappen will take over from Ricciardo on day two of the first test, with the weather forecast predicting it will remain cold and wet on both Tuesday and Wednesday.