The Andretti family is known for their versatility behind the steering wheel and Jarett Andretti is no exception.

His father, John, once raced a Top Fuel dragster and was a winner in both IndyCar and NASCAR, where he drove for stock car racing legends Cale Yarborough and Richard Petty. His great-uncle Mario ranks amongst the all-time greats in motorsports history, the only man to win a Formula 1 World Championship, the Daytona 500 and the Indianapolis 500.

With other famous family members as the grandson of Aldo, the nephew of Michael and younger cousin of Marco, there are always expectations with the Andretti name. So when it was time to choose the proper training, Jarett was enrolled into the Bertil Roos Racing School, which has been training drivers in high-quality, European-style road racing for over 40 years.

In fact, Michael Andretti is also a BRRS graduate, and was coached by school founder Bertil Roos. 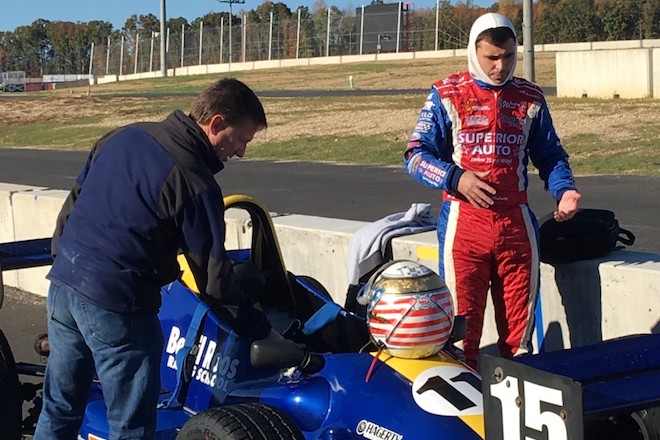 “The first road racing experience I had after go-karts was the 5-Day Bertil Roos Racing School in March 2011 at Virginia International Raceway,” Andretti said. “After graduating from Roos, I went back to my normal racing schedule, USAC Midgets. We won the Eastern Pavement championship in 2011 and competed in the 50th anniversary of the 24 Hours of Daytona in January 2012.”

Just 19 at the time, Andretti was a driver on the Yellow Dragon Motorsports Mazda RX-8 along with his father, Canadian driver Taylor Hacquard and Norwegian driver Anders Krohn at America’s most famous road race.

Andretti started racing non-wing sprint cars in 2012, and he has been doing so ever since. Two years later, he won USAC Rookie of the Year after traveling coast-to-coast competing in 12 states and over 60 races.

In 2016, Andretti won the track championship on the 3/8-mile clay oval at Lawrenceburg (Ind.) Speedway. Last year, he won the championship for the nationally-televised Indiana Sprint Car Series.

This season, Andretti is embracing his road racing heritage, driving a No.18 Volkswagen in the Pirelli World Challenge TCR class in addition to his sprint car schedule. And for that, he’s grateful for his Bertil Roos training in a highly intricate and technical form of racing.

“I will be leaning on my Roos experience now more than ever and look forward to getting back to one of my favorite tracks, VIR,” Andretti said. “To this day, the South Course is still one of my favorite road course I’ve raced on and I’m glad I got to experience Oak Tree before they eventually cut it down.”

To get the quality instruction like Andretti and so many others from the hobbyist to the top levels of racing have experienced, visit racenow.com or call 1-800 RACE NOW.