Aside from two hiccups that arose during the weekend, Martin Truex Jr.’s race at Atlanta was almost predictable – which at this track, isn’t a good thing for him.

“I thought we had a really good car and had good speed, we just didn’t have the long run balance where it needed to be,” Truex said after a fifth-place finish. “Even the short run – the second half of the race I wasn’t happy with how it was driving. We’ve got the speed, we’ve just got to get it driving right.

“I feel like every time we’ve come here the last couple years we’ve run good the first half of the race and the second half of the race we’ve always struggled, and it’s been the same exact trend. We just haven’t figured it out here yet.”

Truex wasn’t going to complain about a top five. His weekend got off to a troublesome start when he failed to make a qualifying lap after his No.78 Toyota failed inspection three times. As a result, he lost his car chief, Blake Harris, for the remainder of the weekend and had to come from the 35th starting position.

Once the green flag fell, though, Truex was one of the fastest cars in the first portion of the race. He rocketed from 35th to 25th by Lap 3. He was 18th at Lap 7. By Lap 15, Truex was sitting inside the top 10. 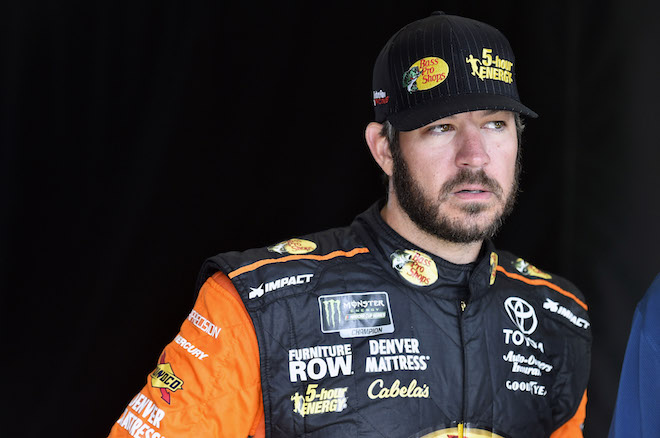 “We were pretty good there on the start and able to get to the front, so that was kind of neat,” Truex said.

Then the second setback. Twice Truex lost his track position because of slow pit stops as the team struggled with the spec-issued pit gun. Track position ended up being more important than Truex said he realized and over time it became harder and harder to make up spots as the competition continued to dial in their cars.

Calling the day “a battle,” Truex and crew chief Cole Pearn could never get his car to settle in. It would do one thing on the long runs, another on the short run. When they worked on one side of the equation, it threw off the other side.

“But [I] feel good about the team and the execution, the racecar that they brought here,” Truex said of his first top-five finish at Atlanta since 2013. “And aside from that little issue in pre-qualifying inspection, it’s been a smooth weekend and we learned a lot. So, looking forward to moving to Las Vegas – one of our stronger tracks – and see if we can go get ’em.”

Truex is the defending race winner at Las Vegas, and seven of his eight race wins last year came on 1.5-mile tracks.