MILLER: Spitting in the face of tradition

MILLER: Spitting in the face of tradition

A lot of good and bad ideas have come down the straightaway at the Indianapolis Motor Speedway during the past 30 years. Tony George’s SAFER wall was the single best thing to ever happen to oval-track racing, and the Fast Nine helped restore some drama to qualifying since Bump Day no longer exists.

Of course removing the apron, the 25/8 rule, spending millions on Formula 1 and the newest laugher – Tiny House Hotels – would have no doubt left Tony Hulman and Joe Cloutier dumbstruck. But nothing spits in the eye of tradition more than the latest missive from the IMS Museum.

Starting with this year’s ballot, which was due earlier this month, the voting for the IMS Hall of Fame has been expanded to include members of the NASCAR and Formula 1 communities that “have made major contributions to auto racing at the Indianapolis Motor Speedway.”

Digest that for a minute. The most famous race track in the world, whose reputation was cemented by 100 years of blood, sweat and tears every May, is now sharing its heritage and place of honor with two groups that had nothing to do with the Speedway’s mystique, success or popularity.

Sure, NASCAR was clever enough to capitalize on the open-wheel war in the mid-90s and take over 16th & Georgetown for a few years, but it’s been relegated back to a glorified tire test in recent years.

F1 started with a massive crowd in 2000 and was gone seven years later after Bernie Ecclestone picked the IMS carcass clean, and Michelin pissed everyone off by withdrawing its teams before the green light in 2005 [below]. 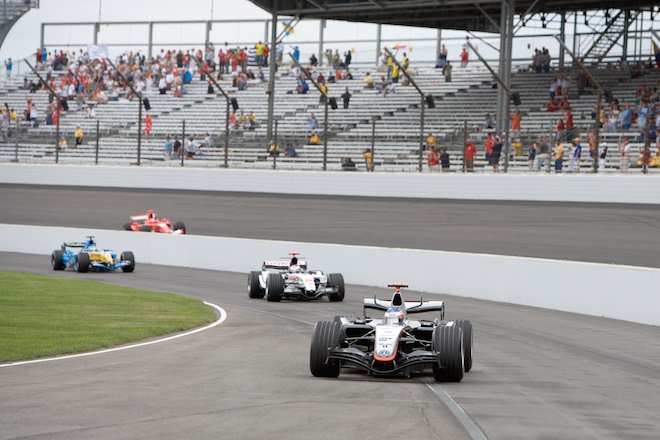 The idea of the Indianapolis 500’s legends, innovators and men that died chasing the checkered flag now having to share the historical spotlight with NASCAR and F1 is as insulting as it is ludicrous.

Jack Brabham, Colin Chapman, Jim Clark, Graham Hill and Jackie Stewart are already in the IMS HOF and rightly so, since they led the rear-engine revolution and helped change the face of the Speedway in the 1960s. They were F1 champions that left their mark during May – not add-ons with an asterisk – and two-time world champ Fernando Alonso certainly earned consideration with his resplendent rookie performance last May.

A versatile star like Tony Stewart [below], who led four out of the five Indy 500s he competed in, was likely going to be nominated for the IMS HOF some day anyway, and didn’t need a special dispensation. 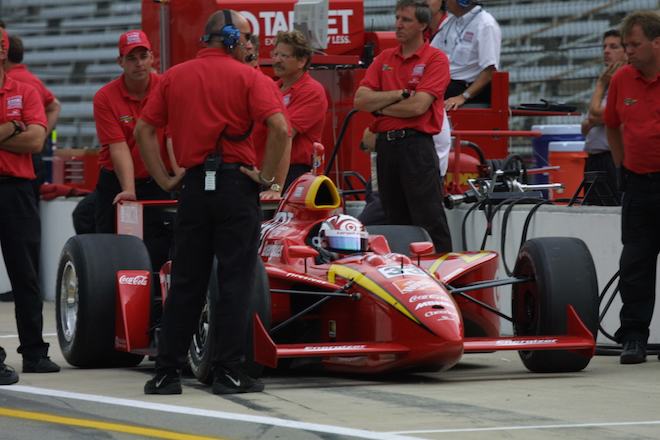 You want to honor Jeff Gordon for five Brickyard 400 wins or Michael Schumacher for his five F1 triumphs at IMS? Then build a couple statues inside the IMS museum. But don’t mess with history.

Shamefully, Jim Hurtubise isn’t and never will be on the ballot, allegedly because of his 1978 protest during time trials. Never mind that he was one of the bravest, most popular Indy drivers of all time who nearly broke the 150 mph barrier as a rookie, gave the Novi some of its finest moments, and made a gallant comeback after suffering terrible burns.

But evidently Herk isn’t worthy. It would probably be better to nominate the Bodine brothers or Flavio Briatore – you know, those IMS legends. Hell, while we’re at it, let’s include the Red Bull air race pilots, MotoGP riders, SVRA graybeards and the first guy to drive the tour bus.

IndyCar has enough challenges trying to break out of NASCAR’s shadow and become relevant again with the American public, so why would you want to share this sacred stage with anyone else?

To dilute a place that’s always honored the Indy 500’s greats is just so wrong – like leaving Herk off the ballot every year.