Mercedes has unveiled the car with which it will attempt to defend both Formula 1 championships during a filming day at Silverstone.

While small issues kept the W09 in the garage for much of the morning, Valtteri Bottas put the first miles on the new car at the home of the British Grand Prix before it was officially unveiled in the pit garages. Similar in concept to last year’s car that won both titles, the W09 has tighter rear packaging compared to its predecessor.

“Because the regulations are stable, as you have seen with all the other cars that have been launched, there’s not a lot of difference,” Mercedes boss Toto Wolff said. “The main difference is in the detail of the cars. I wouldn’t be able to point at one thing and say this is what I like the most. The most visible is the aero and how tight the packaging is of the car.”

Having described last year’s car as “a diva” due to its temperamental nature on certain tracks, Wolff added: “We hope that we keep the good character traits of the diva. 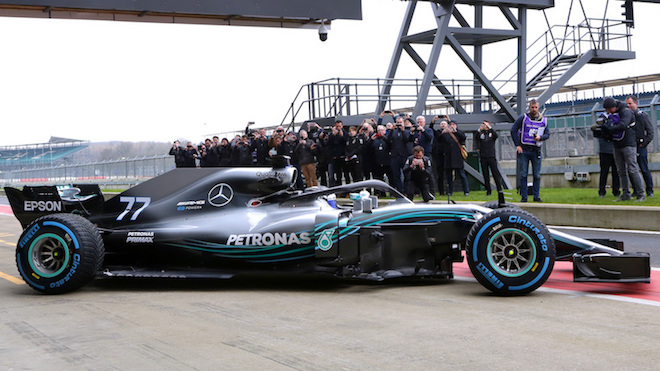 “We all like divas. Sometimes she was a bit difficult to understand and this is the area where we worked the most, trying to understand and preserve what we have in terms of speed in the car and equally find more driveability.”

After Bottas completed the first laps on Thursday morning, teammate Lewis Hamilton will take over in the afternoon on what is a filming day that allows the team to complete 100km (62 miles) on promotional tires.

“It’s very humbling to see everything coming together,” Hamilton said. “People have worked so hard on this car, committed for such a long period of time. I’m just keen to get out there and take it to its limits. I’m one of only two people who get to drive it and there’s this proud feeling because I know how much work has gone into getting the car ready.”