Three of the privateer LMP1 teams and the factory Toyota squad are testing their cars this week ahead of the 2018/19 ‘Super Season.’

At the Algarve International Circuit in Portimao, Portugal, Toyota Gazoo Racing is in the midst of its third major test of the year, after it completed two runs in January with its revised TS050 HYBRID at Aragon in Spain. All six full-season factory drivers including Fernando Alonso and Anthony Davidson, who was recently moved into a test and reserve driver role, have spent time in the car. This week’s track time marked Alonso’s second endurance test with the team.

Toyota is running an identical program to its second Aragon test at the end of last month, with a development run on Monday to test various components. Toyota then embarked on a 30-hour endurance run, beginning on Tuesday, which concludes tonight at the Portuguese circuit.

The Japanese marque confirmed to RACER that it has focused on problem solving, a spokesperson explaining that the team has been “simulating various unexpected situations – running test drills for various technical issues on the car, whether it’s implementing a strategy to get the car back to the box in case of a specific problem and/or practicing the actual repairs.”

The team has spent time practicing pit stops and is preparing for the changes to the regulations for this season. Each driver has been behind the wheel for long runs.

RACER understands that the test has gone well so far; the only hiccup was caused by a loose drain cover on the track, which costing the team an hour of track time.

In Spain, SMP Racing, TRSM and ByKolles have been sharing Motorland Aragon, providing the first true comparison of three 2018 machines over three days. 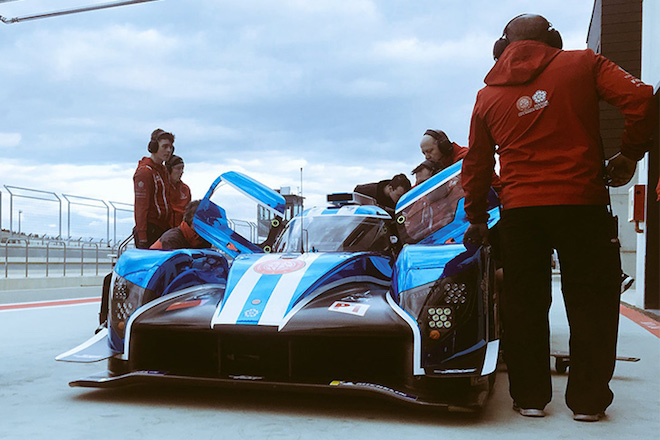 Assisted by the Ginetta test and development team, the CEFC TRSM Racing team (pictured above, formerly Manor WEC) took on the planned three-day session with one of its new G60-LT-P1s, while SMP Racing ran one of its BR1 AER’s (its other chassis is currently on display in Monaco at an automobile salon) and ByKolles tested its revised AER powered CLM P1/01.

This week marks the first full test and the first run in dry conditions for the Ginetta camp; the new car’s action prior to this trip was a shakedown in the drizzle at Leeds East Airport close to the Ginetta factory in Yorkshire, United Kingdom, and a brief run in the wet at Snetterton.

The GINETTA… What a car!!

Joining the team for the test have been the TRSM squad’s named WEC drivers Charlie Robertson and Oliver Rowland, as well as Ginetta factory driver Mike Simpson plus ex-F1 ace Robert Kubica. RACER understands that the Pole has yet to complete any significant running in the Ginetta thus far.

In terms of lap times, trackside observers told RACER that on the timing screens Ginetta put in an early lap in the very low 1m19s with the CLM in the mid 1m19s and the BR1, now well into its test cycle, in the mid 1m17s. One source suggested that that the CLM managed a lap in the 1m18s, though without a transponder fitted.

According to Spanish sources, prior to this week’s run with the privateer P1s, Toyota’s TS050 HYBRID in January was putting in 1m18s during its longer runs.

In terms of other drivers on hand in Aragon, SMP’s BR1 has been steered by Mikhail Aleshin and Egor Orudzhev, the pair running for at least some of the test with the car’s low drag body kit. ByKolles has been running with its only confirmed driver for the year, Oliver Webb, as well as Tom Dillmann, James Rossiter and Ling Kang.