My sister  hates racing. She can play soccer with the best of them, manage an NHL team from her living room, and has a comfortable life of associating with guy friends over worrying about clothes and cocktails.

But racing? If she’s not making a comparison to watching cereal float around a toilet bowl, then she’s trying to get someone to change the channel.

Here’s the kicker: my sister would ask how Danica Patrick was doing.

It is complicated and yet perfect at the same time, because that’s what Patrick’s NASCAR legacy is: complicated.

Classified 35th in the Daytona 500 after being involved in one of the many big accidents, Patrick has officially exited NASCAR stage left. For those who believe Patrick’s career was full of bad luck, it was fitting that the end came through being caught up in an incident not of her own doing.

Alternatively, it was just another unremarkable day for a driver who, when came to on-track performance at least, did unremarkable things during her five full NASCAR seasons. 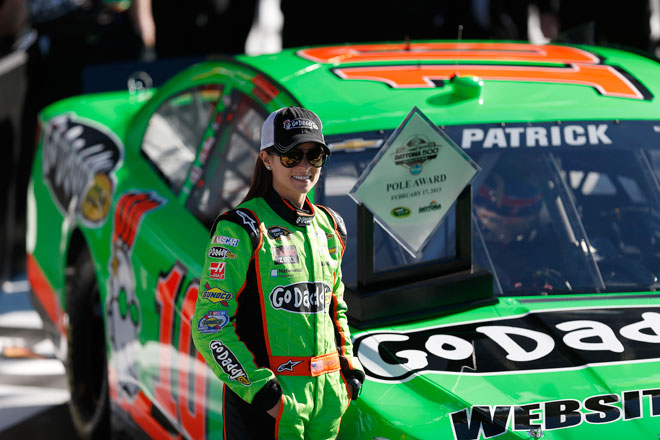 Although Patrick went out with a whimper, she came in with a bang. Patrick became the first female to win a pole in NASCAR’s premier series when she topped the board for the 2013 Daytona 500 (pictured above). She is also the only woman to lead laps in the Daytona 500 (also in 2013), and with an eighth-place effort (yes, in 2013), the highest-finishing female.

Analyzing her overall body of work in the sport, those Cup numbers, as well as 61 Xfinity Series starts with seven top-10s, one top five and one pole, you might ask, what did she really do? For all the fanfare and media attention that constantly enveloped Patrick, there was little that warranted it when it came down to the business of delivering on track.

“What I came to [realize] in the end was, I’m honored there was disappointment,” said Patrick in a recent ESPN story. “I’m disappointed because it meant you expected more, and I did too, right? You saw me through my eyes. You saw the potential. You hoped for what I hoped for and believed it was possible.”

Yet as one of the world’s most recognizable athletes, Patrick did make an impact in NASCAR. See, I told you it was complicated.

Saluting Patrick ahead of her final race in the driver/crew chief meeting this past Sunday, NASCAR executive vice president and chief racing development officer Steve O’Donnell also used the word ‘impact’. You hear that same word associated with her name all through the garage, and in the press.

Since the first NASCAR national series race that Patrick ran in 2010, there have been eyeballs on her, and subsequently on the sport. Plus, she brought a pre-established fan base with her from IndyCar; fans who were going to watch her regardless of what she drove.

Over time, however, Patrick became a role model and a superstar for NASCAR’s younger fans, and undoubtedly for little girls. When making my way down pit road before a race, I knew I could count on seeing young girls standing by Patrick’s car. They just wanted to see the No.10, and perhaps even be lucky enough to get a glimpse of the driver. Those who did would smile as if at Disney World. And the young fans, boy or girl, who were ever lucky enough to come across Patrick in the garage or at an appearance, had their day made by getting a hug.

Thank you @DanicaPatrick for being a strong role model to the little girls in my life. It was an honor to race with you in your last #DAYTONA500 . #StrongIsTheNewPretty pic.twitter.com/KSIsGGsaSw

Johnson is just one of many who have taken to social media to express what Patrick has meant to them and motorsports. NASCAR president Brent Dewar responded to Patrick’s goodbye tweet with, “Thank you Danica!!”

“NASCAR’s most successful female” is how Mike Joy repeatedly referred to Patrick during Speedweeks. And Daytona 500 honorary starter, actress Charlize Theron, provided an idea of how Patrick has been an attraction outside of the racing world.

She’s incredible, and to have her be part of this, as a woman, that just seems pretty incredible,” Theron said. “For me to be able to witness her last race, that feels very special to be here today, too. The girl in me secretly is, obviously, cheering for her as well.

“I just love that even my kids were really impressed that a girl was racing cars today, too. They think that’s such a good thing, and we need more of that, and hopefully, we’ll have more of that enter this culture, which only makes it better and richer.”

My sister may not have been converted to a die-hard race fan because of Patrick, but Patrick made her aware enough to pay attention when a race was on – and even buy a Patrick hat at one point. Just last year she asked me to get her to a race to experience the garage area, and one of her first stops was Patrick’s hauler and car.

Now that Patrick is gone, what she did or didn’t do on the track will be forgotten by many. But my sister and everyone like her will remember that she was here.