The first of three major races in a weekend leading to Sunday’s Daytona 500 Monster Energy NASCAR Cup Series opener, the NextEra Energy Resources 250 was a cavalcade of major accidents. A parade of drivers visited the infield medical center after trucks slammed into each other and/or the inside and outside walls.

Sauter, a winner for the third time at DIS, held off several contenders in the final dash to the checkered flag, edging second-place, 18-year-old Justin Haley by 0.098s.

Sauter called his ride “the most unbelievable truck I’ve ever driven. At the end, I wasn’t quite sure. I thought I saw them coming three-wide.”

As the pack moved toward the finish line, the lead-pack trucks of Spencer Davis and Jordan Anderson spun out.

The race’s last major crash occurred with 17 laps to go as five trucks crashed in the fourth turn. Debris was scattered across the track, causing a red-flag period of four minutes and 20 seconds for cleanup.

A WILD Friday night continues. Clay Greenfield takes a hard hit in the No. 68 truck.#NASCARonFS1 https://t.co/gAjo62DVXY

Several trucks were battered with 26 laps remaining when John Hunter Nemechek blew a right rear tire in a pack of traffic. The right rear of the truck had been rubbing the tire after earlier contact with Ben Rhodes.

The race was slowed 45 laps from the finish by a vicious, seven-truck crash in the fourth turn.

The accident began when Grant Enfinger lost control of his Ford and slid through the turn, sparking a melee as drivers went left and right trying to avoid each other. That worked only marginally (video below).

Jennifer Jo Cobb climbed out under her own power after this fiery crash in Daytona. That was a big hit. https://t.co/fXHE1G7Hzl

Jennifer Jo Cobb had the hardest hit during the accident as her truck slammed into the inside wall near the entrance to pit road. The truck bounced off the soft-wall barrier and limped to the grass separating pit road from the frontstretch.

Cobb, the only female driver in the race and a veteran of the series, spent much of the race in the track’s medical center. She was released with 13 laps remaining. 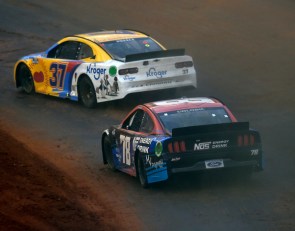 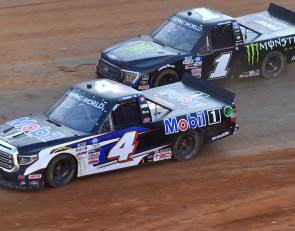