Furniture Row team owner Barney Visser (pictured above in 2016) is making his return to the NASCAR circuit this weekend at Daytona International Speedway after a heart attack and bypass surgery last fall.

Saturday morning, Visser participated in a Toyota news conference and found himself the center of attention. And it didn’t take him long to reassure the room he was recovering nicely and glad to be back in the garage.

“I’m feeling great. There’s nothing like getting new pipes,” Visser said. “I didn’t realize how bad it was, but this has been really good. I’m told I won’t be 100 percent for another three months, so as good as I feel now this is a home run.”

Because of his health problems, Visser did not travel to the final two Monster Energy NASCAR Cup Series races in 2017. That included not being a part of the celebration when driver Martin Truex Jr. won the championship. He also missed the awards banquet in Las Vegas and has been slowly integrating himself back with the team at the race shop.

“I missed the people and the competitive spirit,” Visser said of being away. “I heard the engines fire up the other day, and I realized how much I missed that.”

Visser, 68, took himself to the hospital when numbness in his left arm he felt one night carried over into the next morning. A few days later, he underwent successful bypass surgery. Looking back, Visser said there were signs of what was happening as he suffered from a burning lung sensation that seemed to come and go.

As he was being taken on a gurney for an angiogram, Visser began complaining that it felt like his chest was being ripped open. Shortly after that, he admits he was “out” and doesn’t remember much, including the Texas and Phoenix races.

Seeing the pain his father went through many years ago when he underwent bypass surgery, Visser said that was the source of his concern.

“I wasn’t concerned that this could be it; that never crossed my mind,” Visser said.

Getting his heart rate calmed down enough to watch the championship finale at Homestead, Visser took in his team’s accomplishment from the couch. Over the course of the season Truex won eight races and his first title, as well as the first championship for the organization based outside the NASCAR hub in Denver, Colorado.

“That’s something that’s soaking in over time, what we’ve been able to do. Really proud of the guys,” Visser said. “Of course, none of that happens without these two guys [Ed Laukes of Toyota and Joe Gibbs, pictured below] sitting beside me here.” 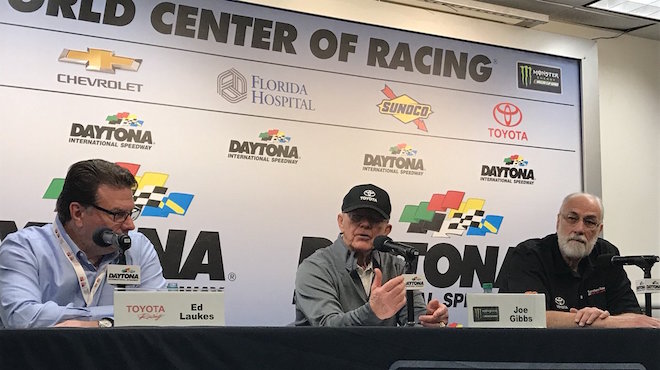 In addition to trying to repeat as champions, Visser acknowledged this season is the last on Truex’s current contract. Suring things up with Truex for the future will get around to being addressed with Visser not anticipating any problems and that Truex will return.