Which assignment was harder for Dale Coyne Racing engineer Craig Hampson within the last week? Was it learning the needs of IndyCar’s new bodywork with driver Sebastien Bourdais at ISM Raceway in Phoenix (pictured above), or spending his first day as a teacher at his daughter’s middle school in Illinois?

As the championship-winning race engineer tells it, prepping a lesson plan for a group of extra smart eighth graders might have been a taller task than making the Frenchman happy on the one-mile oval.

“We have very good schools in our town, which is the reason we live in the greater Chicago area, and my oldest daughter started middle school this year and is in an advanced math class with an exceptional teacher,” Hampson told RACER. “He put out a call and said if your parents use mathematics in their jobs, he’d like to have us come in and talk to the class, so I volunteered.”

The thought of teaching in front of his daughter’s class seemed like a lovely idea. That plan quickly changed.

“I thought I’d end up being in my daughter’s class, but when he heard what I did, he thought it was better for his eighth-grade class. I purposely planned it for the Monday after Phoenix because I knew I’d have that day off, and in terms of creating the lesson plan, it turned out to be a huge pain,” he said.

“I never anticipated that. You realize teachers must work very hard with what they present to the class on a daily basis. It took a lot of time I had not expected to consume, but I wanted to give them example problems and show how you’d solve them by hand.” 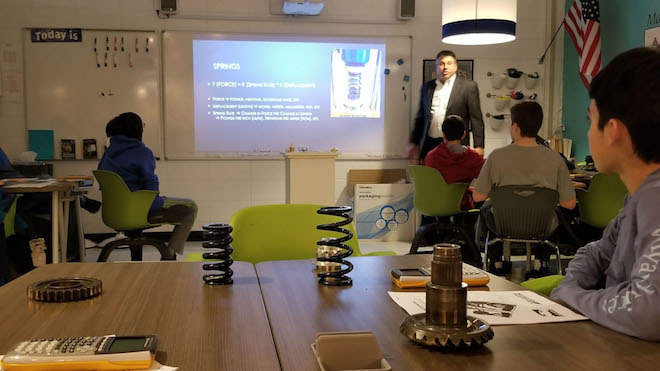 In his new one-day role as Mr. Hampson, Math Teacher, the world of racing was introduced as an education-based puzzle to assemble using what they’d learned so far this year.

“I did a PowerPoint, brought in pictures and animations of the parts and pieces on the car; my daughter made a highlight video of the cars racing on ovals, road course restarts, crashes, Hinch’s last-lap Brazil win, Sebastien doing donuts after a victory,” he said.

“And since these were advanced math kids, they were really engaged and were able to solve everything put in front of them. I brought in some gears, springs, an old wing flap, and various things they could feel and hold. They did calculations on fuel consumption and race strategy, and all kinds of things that put their knowledge to the test and I was greatly impressed with how sharp they were.” 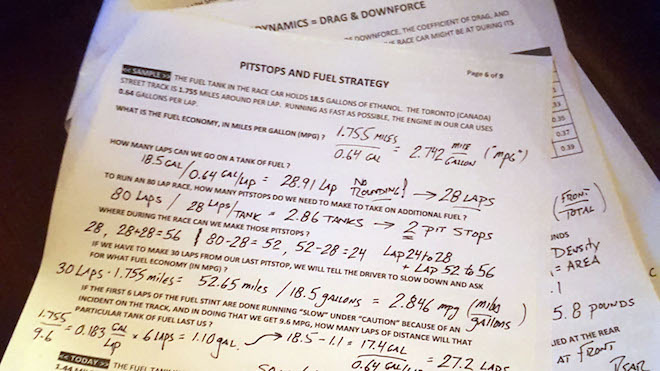 As the son of an educator, Hampson says teaching is something he’d enjoy at some point in his life, and wouldn’t mind lending his skills to a program that has been invaluable to the sport.

“Overall, I enjoyed teaching, sharing with them what I do and care about, and there might be a few kids whose interest is piqued and they’ll go to Elkhart Lake, or Gateway, or Iowa, or Indy,” he said. “Maybe we’ve opened some eyes on what you do as an engineer and how S.T.E.M. applies to something as different as race cars and race engineering.

“I hadn’t thought about teaching before, but my mother was a teacher at the high school and college level. I only have a bachelor’s instead of a graduate degree, which could be a drawback; I was pursuing my graduate’s but Newman/Haas offered me a job and I took it, like an idiot. So I don’t have an advanced degree, but being an advisor to a Formula SAE team at a college would be a wonderful team. I think I’d enjoy that.”